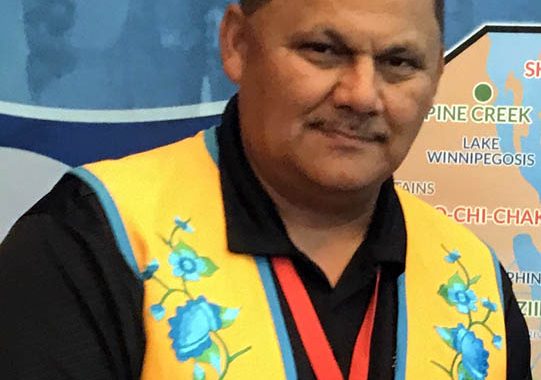 Treaty 2 Territory – Chief Wayne Desjarlais doesn’t care much for fancy words. In fact, he would do very well without them thank you very much.

The words that mean the most to him are the ones written in stone.

On those you can rely.

The long time educator and public servant in his community of Ebb and Flow First Nation says that is what the Treaty relationship means to him as a Chief of his community.

“I’ve always expressed that Treaty 2 is a stronger organization than any other PTO we have in the province. Because it deals directly with Treaties and the First Nations peoples that signed it on August the 21st, 1871.”

“At that time it was nation to nation, today we have provincial and federal and we’re not necessarily dealing with the Crown,” he said.

“If you look at the vast land mass where Treaty 2 is, there are 22,000,000 acres of land. Education is important. It’s good to try and get more people familiar with what Treaty 2 organization is about. One of the things I recommended is to put Treaty 2 billboards on all provincial roads leading into the territory.”

Chief Desjarlais says somewhere along the way the Treaty relationship became clouded and morphed into what it is today.

With the needs of his community growing alongside inflation costs adding up, there needs to be a change in funding and a Treaty based model would ensure more funding would come directly to his community where schools, housing and infrastructure are in a dire need of updating.

Chief Desjarlais is aware something needs to change and change quickly.

He’s reminded of the reason why that needs to happen every month.

Under Treaty her Majesty is responsible for the well being of those who made Treaty with her and as of 2019 that fiduciary obligation isn’t being met.


“It’s unfortunate but that’s what the Government of Canada is leaving us.” said Desjarlais. “I guess what that’s what we’ll be working on for the government to raise those standards. With the cost of living for the month our people get $220.00 for a single person and that’s not too much to live on with inflation factored in.”

“Treaty 2 has come a long way since I first got involved nine years ago,” he said. “We need to get money back from the resources coming from our territory and have it come back to the communities for the long run benefit of our people.”