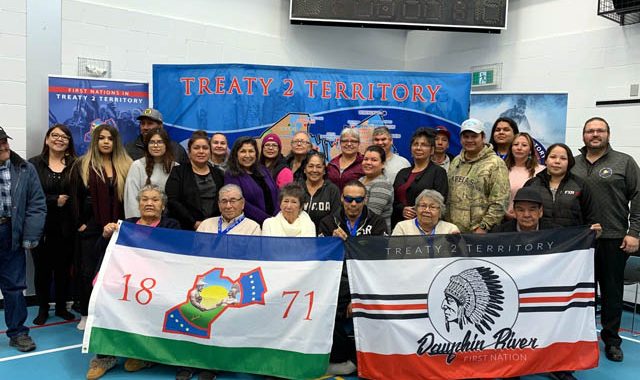 Treaty 2 Territory-Dauphin River First Nation members took the time Wednesday to ask questions about how a potential Community-based Treaty-based government would look like.

‘What’s replacing the Indian Act?’, how does implementing a Treaty based government affect the funding structure of monies flowing to the community and concerns about any potential change appearing to be a municipal system coming to the forefront.

FNiT2T took a team of people to answer the questions, assist with explaining the community based treaty governance model and provide an update about the newly formed TNiT2 secretariats, which were launched on April 1st.

The community was one of the Treaty 2 First Nations that was hit hard by the 2011 flood when the Province of Manitoba diverted the flow of water and affected First Nations along the shores of Lake Manitoba and Lake St. Martin.

Yolanda Thompson began by introducing the local governance committee who have been busy working on a new constitution.

The history of the treaty was presented along with the purpose behind the making of Treaty 2, to make way for settlers and immigration, explaining the Crown’s need of consent of the Indians to do so. Compensation for lands taken was also discussed.

Former Dauphin River Chief Emery Stagg, employed by IRTC made a presentation on land use where he addressed the future use of existing land in the community’s available 800 acres.

Stagg broke down the numbers, saying when Dauphin River was surveyed there were 5 families with 160 acres available for each of them.

But the community has grown since that time leaving them with almost no available land as Dauphin River’s population has swelled to 100 families. Stagg focused on economic development and staying the course of self reliance.