Natural World, newsFNiT2T Presentation to The Committee (Canada) on Bill C-68, Amendments to the Fisheries Act – 7 May 2019 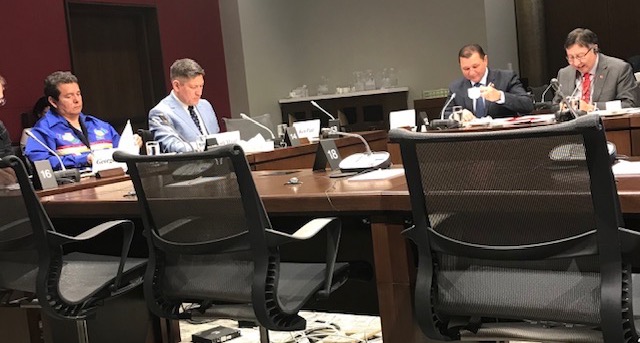 FNiT2T Presentation to The Committee (Canada) on Bill C-68, Amendments to the Fisheries Act – 7 May 2019

Good evening, I am Joseph Maud, Director for the Care and Protection of the Natural World at the First Nations in Treaty 2 Territory (FNiT2T) government, which is situated across two provinces of Manitoba and Saskatchewan.

We are here today to relay the messages from our people that represent the Spirit and Intent of Treaty 2, made on August 21, 1871, which was based on a mutual commitment to live together in peace and friendship remains.

The Treaty 2 Territory is defined by its lakes and rivers. The Treaty describes the boundaries that include the mouth of the Winnipeg River, Lake Winnipeg, Berens River, Lake St. Martin, Lake Manitoba, Lake Winnipegosis, Waterhen Lake, the Shell River, the rapids in the Assiniboine River. Included in the territory is Lake Dauphin and Clear Lake.

We are glad to see that Canada is finally mandating the protection of the Lake Winnipeg Basin, considering it is dying from pollution and interference with its natural process. A large area of the southern basin lies in Treaty 2 Territory and historically has been a major aspect of our natural economy and lives. We expect that the Minister of Fishers will support a nation-to-nation relationship with us, based on respectful cooperation and partnership and recognition of our Inherent Rights.

We have always known that proper management and control of our fisheries is required to maintain a healthy quality water not only for humans, but all other life that depend on it. The conservation and protection of fish and fish habitat in Treaty 2 Territory, including by preventing pollution is crucial. We expect that the proposed Fisheries Act Bill C-68, will provide protection not only for today, but lasting many generations to come.

We recommend that the Senate Committee amend the Bill to ensure that the process of authorization of projects in and near Water Bodies which might result in the death of fish or harmful alteration, disruption or destruction of fish habitat be broadened to include “spawning and migration of fish” must include FNiT2T meaningful involvement. It is easily conceivable that a project that does not actually kill fish or alter habitat may still cause significant disruption of spawning or other migratory habits and requirements of fish that the entire fishery could be severely diminished.

Having said that, we are concerned about the definition of “Indigenous governing bodies” and how that definition is applied. Who says who is and who is not an “Indigenous governing bodies?”  Who decides? Is a strong fishers’ organization less qualified to advise the Minister than the head of another organization? The draft Bill must be revised to clarify these significant questions.

Consequently, we strongly recommend that the Bill be amended by adding the proviso declaration, “if that province has laws that are deemed equivalent to those provisions or regulations with the proviso that such declaration has no force and effect in relation to rights and interests protected by s. 35 of the Constitution Act 1982 and subject to s. 91(24) of the British North America Act 1982.”  We assume that Clause 6 of Bill C-68 extending the application of this declaration of equivalent provisions to the laws of Indigenous governing bodies that are in effect in the territories governed by these bodies (amended section 4.2(1)) is not intended to apply to “Treaty 2 Territory” or the “Territory set out in Treaty 2”?

We support the repeal of the definitions of “Aboriginal” in the Bill. The term is the product of the Doctrine of Discovery, and while it is unfortunately used in the Constitution of Canada 1982, should not otherwise be uttered with respect to the People of Treaty 2 Territory.

We wish to be sure that the term “fish habitat” defined in Clause 1(5) is interpreted to mean “fish habitat” as it was at the time Treaty, including those areas that have since been taken up by Settlers and impacted the wellness of the habitat and waterways. Due to Settler “civilization,” the natural “fish habitat,” has been dramatically affected and required severe remediation for its and our continued survival. When water is poisoned with chemicals, sewage, garbage – fish die. They get diseased. Deformed. They are unable to be what the Creator intended them to be, sustenance for us and other life.

We would like to also highlight that the diversion of waterways is an on-going issue such as the run-off water from fields along the Missouri River hundreds of miles away in the United States. It is then diverted into the Assiniboine and further diverted into Lake Manitoba and Lake Winnipeg. We would like to remind you that the water flows north into Hudson’s Bay and into the Arctic and Atlantic Oceans. The diversion of waterways and their detrimental impact is not only nationally but carries with it global impacts.

Our Nations within the Treaty 2 Territory, that are dependent on the fish and their habitats, yet we are unaware and have not been meaningful consulted on the amendments nor were advised on the advanced stage of the revisions; although this Bill affects our Inherent Rights.

At the same time, we feel that this Bill generally is positive, an improvement, and we do not wish to delay its passage, however our Inherent Rights must be respected and adhered to.

Having said all this, made all of these recommendations, the sad fact is that very little of your good work will apply in our Treaty 2 Territory.

We have no way of knowing, but our hunch is that neither was the Committee informed of the situation which we face, and that the Committee – you Senators individually – are being asked to contribute to the continuance of grave injustices.

The protection, ownership, allocation, use and management of fish and fish habitat, in Manitoba, are governed by a) the Canadian constitution, b) Treaties and c) Federal and Manitoba legislation.  Treaty No. 2 provided for a portion of the lands in the territory to be taken up for immigration and settlement providing compensation was paid by Canada.  The Constitution of Canada provides that any law of Canada which contradicts that arrangement is of no force and effect. Joint management for fisheries must occur and FNiT2T request, is ready and prepared to enter into discussions with Canada immediately. The Duty to Consult must take place regarding these amendments

It could be reasonably argued that compensation would be paid by Canada for the use made by settlers of waters and/or for fish taken by settlers.

Over the years, the impacts have been so negative that the very productive fisheries which once sustained our lives have virtually disappeared.

Treaty 2 was made in 1871 without any mention of the natural resources.

However, the Constitution Act of 1930 pretended to give legal effect to Natural Resources Transfer Agreements in each of the prairie provinces. This legal affect has never been consented to by our FNiT2T Nations.

The Canadian Parliament has assumed it has exclusive constitutional jurisdiction to make laws for the conservation of fish, including setting fishing seasons, quotas, size limits and gear restrictions. It does not.

While Canada in practice assumes it has ultimate legal authority and responsibility for fish and fish habitat conservation matters. To this pretention, most of the day-to-day management and administration of federal fisheries regulations has effectively been delegated to Manitoba officials the Minister of Water Stewardship, the Director of Fisheries and fishery officers employed by Manitoba. They are the ones who arrest us when we exercise our Inherent Rights. We remind you again that we have never ceded our sovereignty, self-determination and self-regulation in regards to managing and controlling our natural resources.

We recommend the following measures:

We thank the Committee for listening. We look forward to your address of our concerns in relation to Bill C-68 with regard to Treaty 2 Territory. We also inform you that our concerns regarding our Inherent Rights we have identified in today’s presentation will be forwarded to the Ministers and we expect