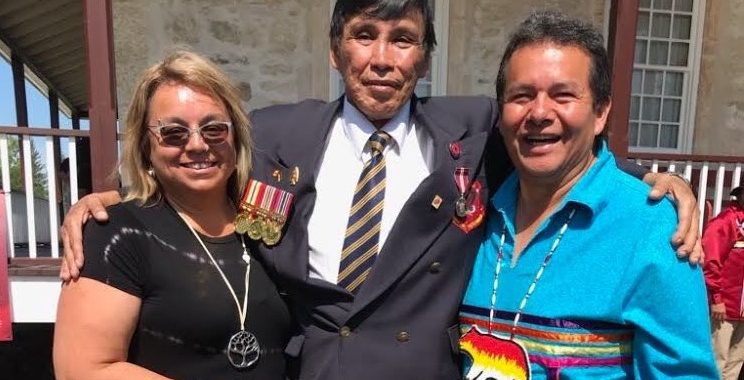 On August 3, 2019, Sargent Tommy Prince from the Brokenhead Ojibway Nation was honoured as a “Home Town Hero” at the celebration of the Treaty 1 at the Lower Fort Garry Stone Fort. Dr. Betty Lynxleg and Joseph Maud from the First Nations in Treaty 2 Territory (FNT2T) attended the honouring session for Sargent Prince. Tommy Prince is deserving of this recognition for his commitment to the wars and peacekeeping, which he didn’t have to serve being First Nation, but did anyway and received numerous awards for his bravery. He is a hero not only to the First Nations but to all Canadians.

Sargent Tommy Prince’s son Tommy Junior accepted the award on behalf of his father and told the story of his father who faced discrimination upon returning from the battlefields. The veterans who were non-First Nation received monetary compensation along with land to build their new homesteads, but this was not awarded to the First Nation soldiers. Tommy Junior told the crowd attending the award session that his father became homeless and got caught up in addiction after the war and reenlisted to the Korean war to find himself again and to simply to have purpose. Tommy Junior followed his father’s footsteps by enlisting in the army and also went on to win many awards in his own right.

It was an honour to be in attendance to recognize the remarkable feats of bravery by Sargent Tommy Prince, and also to acknowledge his son and family. We are very proud of Tommy Prince, his son and all other war veterans who gave of themselves for the freedoms currently enjoyed on Turtle Island/Canada.