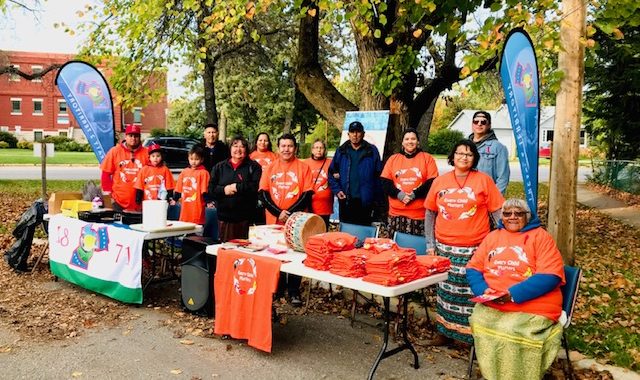 FNT2T at the 2019 Dauphin Culture Days

Treaty 2 Territory, Dauphin – The FNT2T participated in the annual Culture Days, Saturday, September 27thin Dauphin. The Culture Days was coordinated by Mary Myrhe, Executive Director of Dauphin Neighborhood Renewal Corporation. The FNT2T presented to a group of participants who cycled through the City of Dauphin at stopped at eight various locations. The FNT2T was set up near the Law Courts building on 8thAvenue NE.

Joseph Maud and Lorie Thompson coordinated the FNT2T pit-stop which was the 7th location where the cyclists made a visit. Lorie Thompson did the opening remarks, welcomed all participants, and shared the importance of Indigenous culture, and the MMIWGT. Joseph Maud of the FNT2T welcomed participants. Charlotte Nepinak of Skownan First Nation provided a teaching on the animals, and the importance of respecting the animal spirits, and all the living things on mother earth. Elder Marie Nepinak from Skownan First Nation shared the teaching of respect for each other, and how her parents shared the importance of respecting other people.

Following the opening remarks and teachings, everyone participated in a round dance to celebrate Culture Days and were treated to traditional a ribbon in honor of the MMIWGT, “Every Child Matters” orange shirt in honor of the children who attended residential schools, and traditional warm rice pudding. There were nearly 100 participants at the FNT2T location. The FNT2T would like to thank Mary Myrhe and her team for the invitation, and Giche Miigwetch to everyone who volunteer and participated in @DauphinCultureDays.