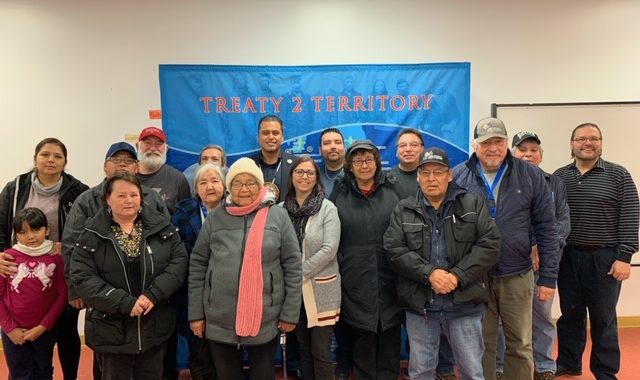 The forum was created to unite the First Nations in and around  the Duck Mountain area which serves as traditional territories for several First Nations and is within Treaty 2 Territory. There are no shortage of issues within this area but the most pressing matters to the collective are the Louisiana Pacific Forestry operations, namely their upcoming 20 year Forest Management License renewal and the status of the Moose populations contained within.

There were numerous communities represented at the December 10th meeting several with direct interests in the two agenda items.

Wuskwi Sipi reps presented their community’s Moose Management Plan which was seen as a proactive approach by the community and supported by an Elders Resolution.

Pine Creek reps presented an update on their interactions regarding work on LP’s forestry activities and subsequent interactions with the province. There was also an update on the ongoing water sampling project for the community. Pine Creek’s water source comes from different watersheds. The community is continually studying the environmental impacts of industry to the surrounding waters and work will commence in 2020 on another project.

Ron Missyabit circulated a proposal that was received from Alistair Bath on a proposed project regarding the creation of an inclusive process to address the moose populations in the area. The message conveyed to Mr. Bath from Treaty 2 is the area is more then moose and we cannot look at moose populations without examining LP’s activities and their current renewal process. To demonstrate this point further, government letters were received by communities the day before the meeting regarding the Crown’s decision to grant LP a two year alteration which will allow the company to operate while the crown reviews their draft Forest Management Plan, which is to be submitted to the province  by December 31st, 2019.

The representatives of the  communities in attendance have agreed to continue with meetings to strategize on how we proceed.