The Anishinaabe territory is much larger and extends beyond our current territory. Today Treaty No.2 territory extends north of Treaty No.1 territory, along the east shore of Lake Winnipeg to Berens River, across to the Dauphin River along with water ways up to the northern tip of Waterhen Lake, across Lake Winnipegosis north of Duck Bay, then 2 miles west of the the source of the Shell River in Duck Mountain along the Assiniboine to Fort Ellice, 2 miles west, then to the Moose Mountain across the international border up to Brandon rapids located 2 miles east then to white mud river across over to the Drunken River, then to Winnipeg River where it started.

No other Treaty area in Canada has had this mixture of complicated historical circumstances which raise questions as to “who is Treaty 2 and who isn’t.” 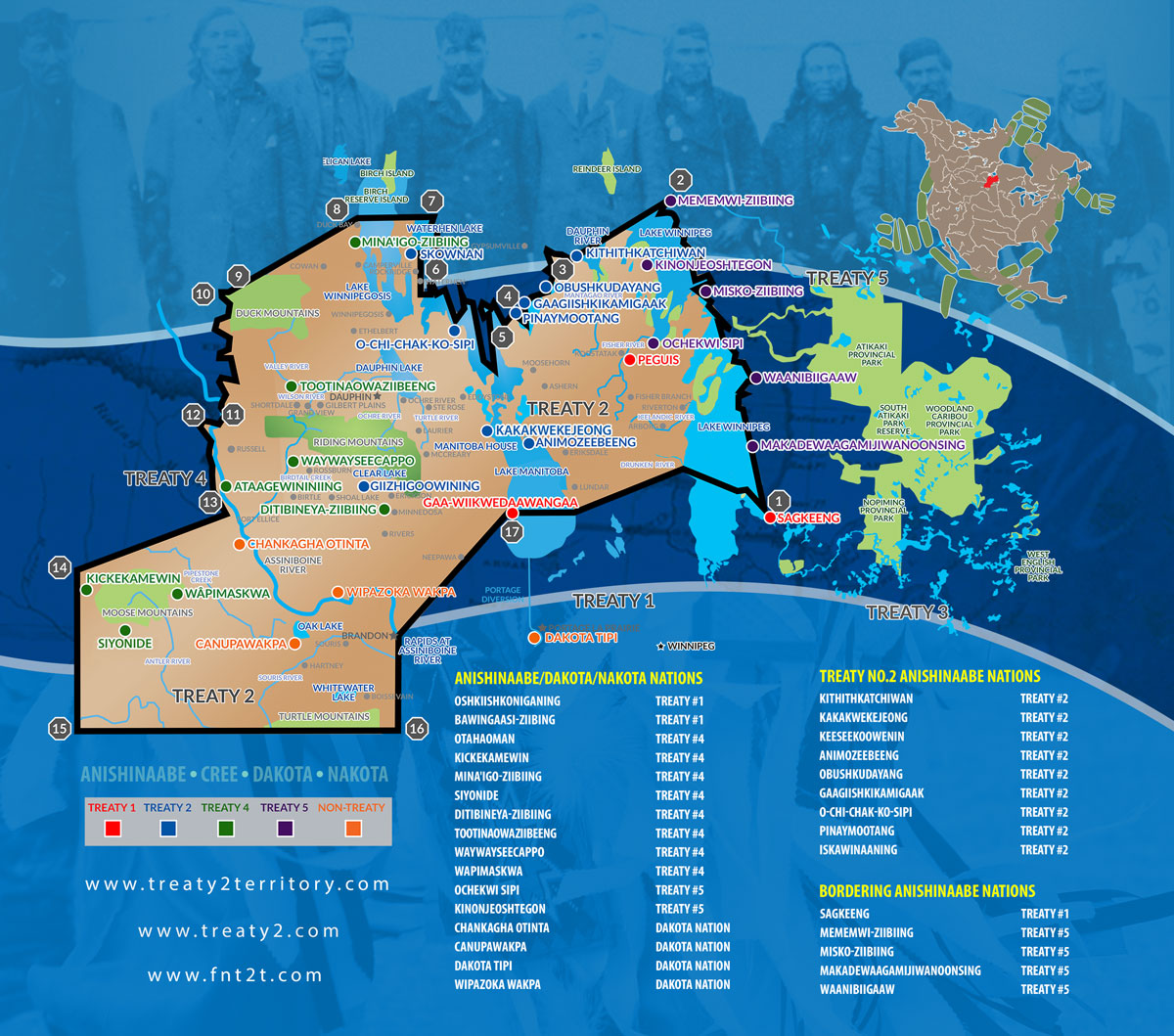 Beginning at the mouth of Winnipeg River, on the north line of the lands aggrieved by said treaty;

thence running along the eastern shore of Lake Winnipeg northwardly as far as the mouth of Beren’s River;

thence across said lake to its western shore, at the north bank of the mouth of the Little Saskatchewan or Dauphin River;

thence up said stream and along the northern and western shores thereof, and of St. Martin’s Lake,

and along the north bank of the stream flowing into St. Martin’s Lake from Lake Manitoba by the general course of such stream to such last-mentioned lake;

thence by the eastern and northern shores of Lake Manitoba to the mouth of the Waterhen River;

thence by the eastern and northern shores of said river up stream to the northernmost extremity of a small lake known as Waterhen Lake;

thence in a line due west to and across lake Winnepegosis;

thence in a straight line to the most northerly waters forming the source of the Shell River;

thence to a point west of the same two miles distant from the river, measuring at right angles thereto;

thence by a line parallel with the Shell River to its mouth, and
thence crossing the Assiniboine River and running parallel thereto and two miles distant therefrom,

and to the westward thereof, to a point opposite Fort Ellice;

thence in a south-westwardly course to the north-western point of the Moose Mountains;

thence by a line due south to the United States frontier;

thence by the frontier eastwardly to the westward line of said tract aggrieved by treaty as aforesaid;

thence bounded thereby by the west, northwest and north lines of said tract, to the place of beginning, at the mouth of Winnipeg River.