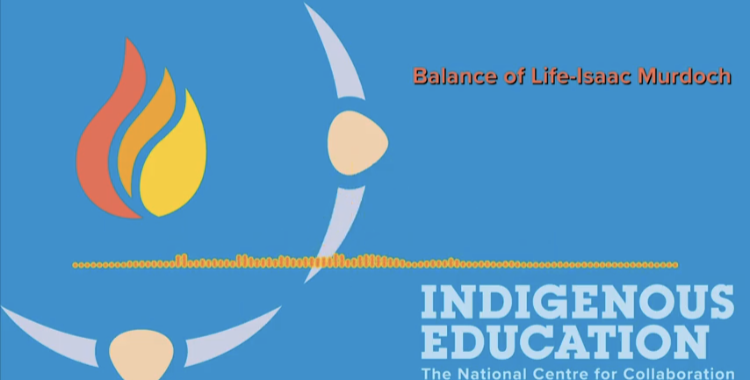 Good day everyone! FNT2T Life Long Learning hopes that everyone is staying safe and well.

We continue to seek out reliable Indigenous Education resources to support caregivers, teachers and students at this critical time. Isaac Murdoch is an Anishinaabe educator, philosopher, speaker, storyteller and artist who takes part in various initiatives in Indigenous (Anishinaabek) culture and language revitalization.

Isaac completed a YouTube recording for the National Centre for Collaboration (Indigenous Education) titled: “Balance of Life”. In this episode, he discusses the importance of Indigenous Education for both Indigenous peoples and non-Indigenous peoples. He discusses how the globalization of Western (colonial) education has not been teaching land and water stewardship; that is, how to live with the land and water in a way that is disciplined and respectful. Western education is more absorbed in resource extraction, people are educated to participate in an economy of consumerism (resource extraction).

Isaac goes on to say that Indigenous Education emphasizes teaching students about the sustainable economies and ways that Indigenous peoples had since time immemorial. And he says that nothing can be more important during a massive worldwide ecological (economical) collapse. This education is critical.

Indigenous Education can teach land and water stewardship. This involves providing land-based education in the language to our children, according to Murdoch.

He believes that the land has laws that apply to everybody because there is a high discipline, in what he refers to as, “Anishinaabek education”. These land laws were applied to the treaties during negotiation because the Elders believe that treaty agreements included that no one was to dig deeper than a hand, shovel or plough. However, over time, the British version of the treaty seems only to talk about extraction thus there needs to be more education on how to live with discipline on the land, respectfully (Murdoch).

Murdoch believes that we need to assert this education in our territories. He goes on to say that Nanaboozhoo left long ago when the people began to follow a new way that separated them more from the land and water, but he said that he’d always be here for the people. When the people went to look for Nanaboozhoo to revitalize their ways, he told them that his daughter would show them the ways but they were not to bother her as a woman so they knew that they had to respect her when they went to her (notice the teaching of respecting women in this story). Isaac holds many stories shared with him by Elders and knowledge-keepers.

Murdoch refers to Indigenous Education; that is, land-based education as highly disciplined. He uses the example of the wigwam and the canoe. He shares that many Anishinaabe people lived in a wigwam for thousands of years. The design of the wigwam never changed because it was constructed in a way that sustained the people. Its poles were aligned with the stars. The canoe, too, was a perfect design that sustained the people. This was the great knowledge of our ancestors; that is, Indigenous Education.

Murdoch shares that the people must continue to do better, be better, and work together for future generations.