The inherent jurisdiction of FNT2T is derived from its existence as a Nation prior to the settlement of Europeans in the territory. Our inherent right to self-govern stems from the Creator who placed us in our traditional territories since time immemorial.

The world view of the people of Treaty 2 is that the Creator gave them instructions as to how to live their lives and fulfil their responsibilities which arise from that Gift of Life. Self-government begins with the individual. All individuals, all creatures, all parts of the Creation have this gift, and each must respect the rights of the other.  For a Treaty 2 person to say, “I acknowledge the right of the government of Canada to govern my life and to govern my nation” is to be removed from the Creator’s intention and from one’s responsibility bestowed upon him or her by the Creator.

“The land cannot speak for itself. We have to speak for it.” Miskookenew (Red Eagle) aka – Chief Henry Prince St. Peters.

The spiritual and legal philosophy outlined above resulted in the Two-Row Wampum, a century before Treaty 2 was formalized. The Wampum essentially states: “You follow your laws and we’ll follow our laws, and we will travel the River of Time in harmony and mutual assistance.”  This was to create a new relationship between two world views. The same concept is in the Treaty, in which our ancestors told the Queen’s representatives, “We offer you a perpetual relationship as long as the rivers flow and the sun shines – in which we will share with you parts of our lands so that you can raise your families and live your lives according to your own culture, religion, language and ways, and we will live together in peace and friendship.” It has been documented that treaty negotiators of the Crown also utilized this statement in negotiating agreements.

The Anishinaabe hold a sacred belief that this unique and complete relationship with the Creator is the source of inherent right to govern. The Crown did not have imperium and the Anishinaabe territory was sovereign.

Prior to 1982, the Parliament of Canada and provincial legislatures exercised authority delegated to them by the British Parliament pursuant to the British North America Act.  That Act provided in s.91(24) exclusive authority to deal with “Indians and Lands Reserved for the Indians”, using the terminology of the Royal Proclamation of 1763. It has always been the original people’s belief that authority could not be exercised in those territories without providing their free, prior and informed consent.

The Crown asked the people of the Nation to enter into Treaty 2, so as to provide the Crown with certain lands for immigration and settlement. The Crown recognized the Nation’s right to govern itself and the sovereign jurisdiction it held over its lands and resources.

In 1982, the British Parliament agreed to allow Canada to patriate its constitution and exercise its own authority.

Neither the Crown, by Royal Prerogative or otherwise, nor the Government of Canada has any legal authority to alter, condition, proscribe, or make stipulations regarding the inherent right to govern.

The inherent right to govern is entrenched in Canadian law. The United Nations Declaration on the Rights of Indigenous Peoples (UNDRIP), Article 4, “Indigenous peoples, in exercising their right to self-determination, have the right to autonomy or self-government in matters relating to their internal and local affairs, as well as ways and means for financing their autonomous functions”.  Canada has officially adopted and has promised to fully implement UNDRIP.

FNT2T’s jurisdiction applies to all people who are physically present within the territory.

FNT2T may also, in the exercise of self-government, apply certain laws of Canada or a province to the people and/or the Territory. It may also exercise its jurisdiction alone or in conjunction with another government in an arrangement which determines which laws apply in the case of conflict of law. Canada has such arrangements with other entities.

FNT2T may also enter into agreements to share legislative, administrative, and jurisdictional functions. FNT2T would be interested in discussing such sharing with other governments. Otherwise, in the absence of agreement, FNT2T may exercise its inherent right of governing alone.

Canada purported to appropriate the inherent right of self-government by passing the Indian Act 1876.

This underlying philosophy was clearly expressed by the Canadian Department of the Interior in its 1876 annual report: “Our Indian legislation generally rests on the principle, that the aborigines are to be kept in a condition of tutelage and treated as wards or children of the State.…the true interests of the aborigines and of the State alike require that every effort should be made to aid the Red man in lifting himself out of his condition of tutelage and dependence, and that is clearly our wisdom and our duty, through education and every other means, to prepare him for a higher civilization by encouraging him to assume the privileges and responsibilities of full citizenship.” (Report of the Royal Commission on Indigenous Peoples, 1996)

It is important to note the change in Indigenous policy from the Royal Proclamation, 1763 to the Indian Act,1876. The Indian Act maintained the Crown’s role as fiduciary and trustee of Indigenous interests but took a very different approach to that relationship. No longer were Indigenous groups viewed as autonomous quasi-Nations within the broader Canadian political system, to which the Crown had an obligation to protect from abuse and encroachment from European colonial society but were forced into subjugation and marginalization.

There exists a belief of colonialists that they could enter the lands of another people, take control of those lands, waters and resources, and govern over them and control their lives. This belief was based on the Doctrine of Discovery in which Pope Alexander VI stated that non-Christians were non-human; therefore, Christians could claim land that was inhabited by non-Christians. This served to justify and rationalize the colonization of Indigenous peoples, lands, resources and waters. The colonial perspective also utilized the notion of terra nullius meaning empty lands. Our ancestors occupied and used their territories, they were not simply nomadic, based on their worldview, they were allowing for the land, resources and waters to replenish themselves by moving within their territories granted by the Creator.

Since the patriation of the Constitution of Canada, 1982, s.35 and s.25 do not allow these past efforts of Canada to be justified.

The Government of FNT2T represents the Territory set out in Treaty 2, occupied by the collective of people at the time of the treaty whether they participated in the making of Treaty 2 or not. Local Nations in the Territory decided to participate in the affairs of FNT2T, 12 June 2018 in the adoption of its constitution and continued governance over the Territory.

As Professor Kent McNeil, Osgoode Law School asserts: “Ultimately, I think identification of the appropriate units for exercising the inherent right of self-government should be up to the . . . peoples themselves.”

In our relationship with the Crown, we each have a sacred right to govern our respective cultures, education, laws, politics, society and wellbeing of our respective peoples.

“The right to govern ourselves is not negotiable”, said the Governing Council of FNT2T

Chief Justice Antonio Lamer said in R. v. Van der Peet, “. . . the doctrine of aboriginal rights exists, and is recognized and affirmed by s. 35(1) [of the Constitution Act, 1982], because of one simple fact: when Europeans arrived in North America, aboriginal peoples were already here, living in communities on the land, and participating in distinctive cultures, as they had done for centuries. It is this fact, and this fact above all others, which separates aboriginal peoples from all other minority groups in Canadian society and which mandates their special legal, and now constitutional, status”.

Chief Justice Lamer said in R. v. Sioui, “… we can conclude from the historical documents that both Great Britain and France felt that the Indian nations had sufficient independence and played a large enough role in North America for it  to be good policy to maintain relations with them very close to those maintained between sovereign nations.”

Our Great Binding Law states: “We are the free and independent Original People of this land. As the roots of this land, we are the true leaders of our ancestral lands – Manito Ka Apit – Where Kizhay Manitou – the Great Spirit – sits. We come from the Dakota, Nehetho, and Anishinaabe Nations who have lived on our ancestral lands since Kizhay Manitou placed us here with our languages, songs, ceremonies, teachings and ways of life. We have always been here.”

“We the Peoples of Treaty 2 Territory have been resilient and resistant throughout the imposition of colonization and dispossession from our lands, waters and resources, the strength, determination and unity of the people remain strong and we will continue to exercise our Inherent Rights granted by the Creator and reaffirmed by Treaty” – Grand Chief Eugene Eastman 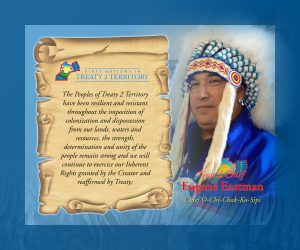