Treaty 2 Territory – Playing in the southern part of the Treaty 2 Territory Brandon this past weekend 18 July 2020, Team Bigman with players hailing from Treaty 1,2,4 played to take the championship pennant and prize of $3,000.  Games were played outside at the Ashley Neufeld Softball Complex and North End Community Centre on Saturday.  Players followed the social distancing rules which applied throughout the competition. 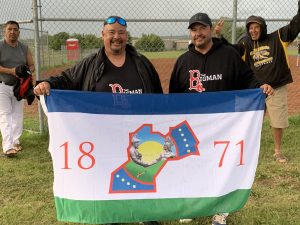 with a very exciting 4-1 win.  Team Big Man is headed by Chief Cameron Catcheway and Councillor Sterling Catcheway both veteran and experienced ball players and coaches. Bo Thomas, hailing from Peguis tossed the ball hard for the win.

The Skownan Giants ended up winning over Peguis for a second-place win.  The Giants are coached by Councillor Jim Chartrand and featured a pretty young and strong squad from Skownan headed by the three Chartrand brothers. 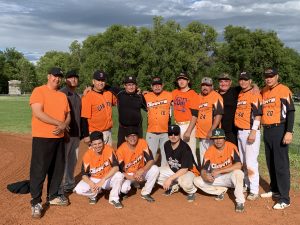 “Im really excited fastball is coming back and for us playing in the Dauphin Fastball league with our young team gives us a boost”, said Coach and player Jim Chartrand.

Hats off to the organizers, excellent work a great success!