With the ongoing moose closures in our territory and as our hunters continue to travel to Saskatchewan to exercise their rights we advise our members to exercise caution as CWD is very prevalent within the province. To date Manitoba has not released or at least has not conveyed any information to our office regarding CWD within our territory or within the Manitoba. It is safe to assume if the CWD is adjacent to us it will eventually find its way into Manitoba.

In Saskatchewan, Last hunting season saw an increase of 1,300 submissions to the provincial government’s CWD surveillance program from 2,000 submitted animals the previous year.  The program detected 528 positive cases, including 414 mule deer, 107 white-tailed deer, six elk and one moose. In 2018-19, 349 positive cases were detected in the province.

“For sure the number, it did increase in terms of positives, but we also tested more animals,” said Richard Espie, a wildlife health specialist with the Ministry of Environment.”

“So really, percentage-wise, the prevalence of the disease is about the same.”

CWD is a fatal, infectious disease of deer, elk, reindeer and moose that affects the central nervous system. There is no known cure.

Officials said CWD was initially detected in Saskatchewan at a captive elk farm in 1996 and in wild mule deer four years later. It has been detected in 55 of Saskatchewan’s 83 wildlife management zones.

The environment and agriculture ministries are working on some different management strategies to help limit transmission of the disease to new species and areas.

“One would be in terms of carcasses where we know there’s a high prevalence in certain areas. We would want to reduce the movement of those carcasses out of those areas,” Espie said.

“I think it’s really important for hunters to get their deer heads tested and to see whether or not they have CWD. If the animal is positive, we encourage hunters not to consume those animals,” Espie said.

“We’re very happy with hunter support for the program… we actually need quite a few samples in order to be able to detect a positive animal in that particular zone. So that’s why we’re really targeting and pushing for good sampling in many of these sites.”

A human case of CWD has never been identified, according to Espie.

We encourage our hunters to exercise caution when processing any animals harvested in Saskatchewan and to follow all provincial standards to protect our animals within Manitoba. 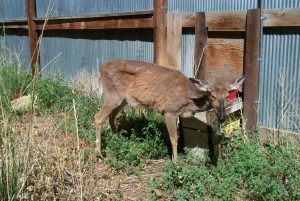