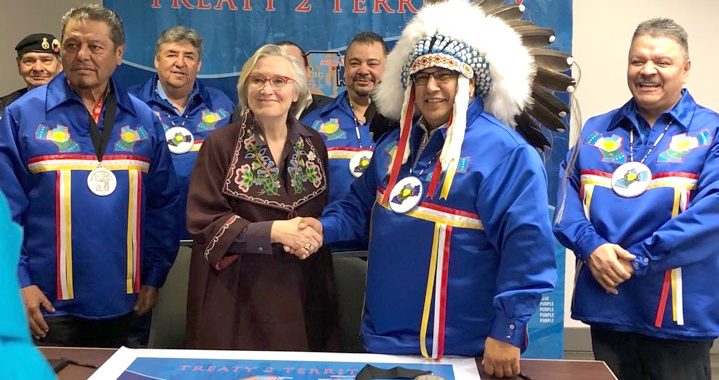 Treaty 2 Territory – With a continued approach in working together the relationship with Government of First Nations Treaty 2 Territory (FNT2T) and Canada continues through the Recognition of Indigenous Rights and Self-Determination (RIRSD) table process.  This process has been operating since November 2017.  Many steps have been achieved and many still need to be including the next steps from the Term Sheet which is a foundational document to move the relationship further.

Now, to continue moving forward with the Term Sheet includes an agreement on governance and recognition for both FNT2T and Canada.  Both parties are to recognize that FNT2T looks after their citizens/members through own ancestral and inherent laws and Canada will look after their own citizens through their laws that will not interfere with FNT2T’s steps and laws, including the abolishment of the Indian Act.

The intent of the Treaty was to provide “compensation for lands required for purposes of immigration and settlement rather than to extinguish rights of our nations” something the forceful Indian Act did 5 years after the Treaty was made.

A term that’s been around since the inception of the act has been emancipation, this starts with moving away from the Indian Act and the mechanisms that control the entire process and continue with the decolonization plan FNT2T has in place.

The Unfinished Treaty Business is advancing slightly with a move to a sub-table and potentially under a tribunal something the letter to Canada in July from Grand Chief Eastman mentioned as a solution.

“The Unfinished Treaty Business is very important to us as it’s the base foundation on why we are here today in this position”.

If the crown actually implemented the treaty and honoured what the crown was supposed to protect, Treaty 2 and many western treaties would not be in the impoverished position today.