Treaty 2 Territory – Good Day. We hope that everyone is staying safe and keeping well.

National Aboriginal Veteran’s Day (November 8th) and Remembrance Day (November 11h) are almost upon us. First Nations (status and non-status), Inuit & Métis volunteered in the thousands to serve in the First and Second World War and the Korean War. It has been estimated that over 12,000 Indigenous peoples volunteered to serve in those three wars (source: “Indigenous Veterans: From Memories of Injustice to Lasting Recognition: Report of the Standing Committee on Veterans Affairs,” Neil R. Ellis, Chair, Feb. 2019, 42nd Parliament, 1st session, pp.7). Most, if not all, Treaty 2 Local Nation members have ancestors and relatives among those volunteers.

Most Indigenous peoples in Canada have heard the names of Ojibwe veterans, Tommy Prince and Francis Pegahmagabow. Prince was from Brokenhead Ojibwe Nation; Pegahmagabow from Wasauksing First Nation of Parry Island. Both men were highly decorated receiving multiple medals for their skill and bravery. Indigenous veterans utilized their traditional knowledge and skills. Many Indigenous veterans served as code talkers speaking their original language which no one could decode, this included Charles Checker Tompkins (Cree) from Grouard, Alberta. John Campbell (Northwest Territories) travelled over 5000 kilometres to volunteer in World War I.

Fred Loft, Mohawk from Six Nations of Grand River, returned from fighting for Canada in World War I to notice that Indigenous veterans like himself were being treated unfairly despite their vast and immeasurable contribution to Canada; in response to this, Loft started The League of Indians. He did not want Status Indians to lose their status (enfranchisement) in order to have the right to vote in an election. He wanted equal rights to support for Indigenous soldiers returning from war including receiving farmlands. The 2019 report on Indigenous Veterans titled “Injustice to Lasting Recognition” by the Standing Committee on Veterans Affairs states that “in order to make land available to other veterans, the federal government, according to various estimates, acquired between 35,000 and 75,000 hectares of ‘Indian lands’” (pp.10). This would have been what Loft was responding to in organizing the League of Indians. He also wanted to First Nations to have greater control over band funds and resources. He wanted the standards of education raised for First Nations children. Fred Loft’s activism resulted in “police surveillance” as he was “branded by Indian Affairs officials as an agitator” (source: A Concise History of Canada’s First Nations 2nd Edition by Olive Dickason w/William Newbigging, pp. 239). Loft’s important work and activism set a precedent for Indigenous peoples today.

Despite the amazing work of Loft and other Indigenous veterans like him, it wasn’t until 1995 that Indigenous peoples were allowed to place a wreath on the national memorial monument with their non-Indigenous counterparts (source: Indigenous Corporate Training Inc). Thus, it is critical that the next generation(s) know their history as they forge ahead in today’s world.

FNT2T Life Long Learning research reviewed the Aboriginal Veterans Tribute List (website) which provides veteran name, Nation and/or community, and service. Ebb and Flow, Keeseekoowenin, Pinaymootang, Skownan, Tootinaowaziibeeng, and Vogar (alongside Lake Manitoba) are a few of those listed on the site. Local members may want to take a look to conduct their own research in finding a relative’s name and his or her’s important contribution. We remember, always. Miigwetch! Renew and revitalize!

Indigenous Corporate Training Inc “Indigenous Veterans: Equals on the Battlefields, but not at Home”: https://www.ictinc.ca/blog/indigenous-veterans

Indigenous Veterans: From Memories of Injustice to Lasting Recognition (2019), Report on the Standing Committee of Veterans Affairs: https://www.ourcommons.ca/Content/Committee/421/ACVA/Reports/RP10301835/acvarp11/acvarp11-e.pdf 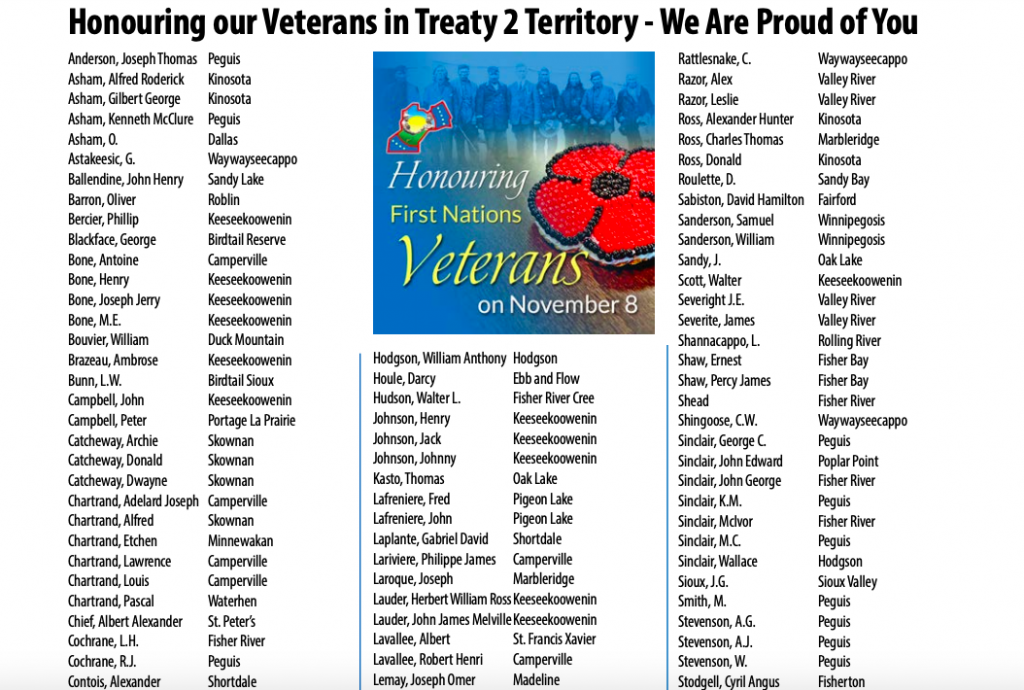 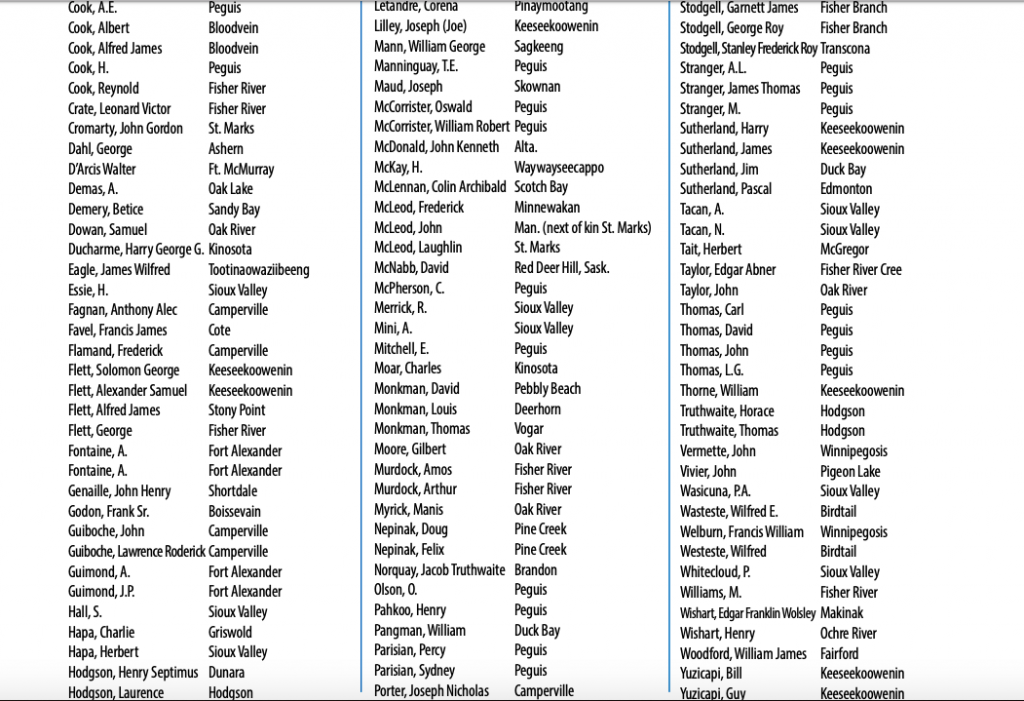