Treaty 2 Territory – The renewal of the Treaty-Crown relationship stems from the 2018 signed protocol agreement to Advance Reconciliation and Renew Relationship – RIRSD.

“The First Nations in Treaty 2 Territory and Government of Canada have achieved a key milestone toward renewed relationships by signing a Protocol Agreement for Advancing Reconciliation. Today, we advance even further in the preparing of a Recognition and Governance agreement discussion” Grand Chief Eugene Eastman

The objective of the meeting was to strengthen relations with Canada and seek new approaches to address the rights and interests of Treaty 2.  In managing this political relationship, a regular circle (table) on the Treaty discussions are being planned  in order to resolve mutual challenges and advance reconciliaction, treaty implementation, economic self-sufficiency, restoration of self-government and nation building at the national level. 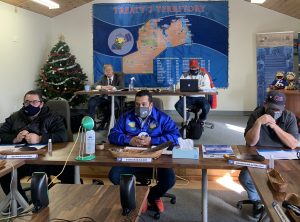 The United Nations Declaration on the Rights of Indigenous Peoples (UNDRIP) was also raised and that the implementation strategy may be better suited and addressed under the RIRSD table process.

The Term Sheet sets out the terms for a negotiation framework and co-developed process form ing the basis for both the Government of First Nations in Treaty 2 Territory (FNT2T) and the Government of Canada to seek the respective mandates. It also considers sectoral agreements based on the priority areas within the obligations of the Treaty-based relationship.

FNT2T is proceeding with the RRISD tables to resolve historical and ongoing interests. According to the Term Sheet, ten priorities set out clear direction for achieving meaningful outcomes.  The specific claims process is also being utilized to advance issues of Unfinished Treaty Business; this was covered in the Letter to Prime Minister, Justin Trudeau on July 2020.

“We are awaiting a response that will determine proceeding with either a  tribunal or litigation strategy”, Grand Chief Eugene Eastman.

Healing and wellness is the pathway to self-determination and true reconciliaction. Health is a sovereign, fundamental and treaty right.  Well-being centres are needed in all our Local Nations to accommodate the wellbeing of our children, families and nation, women and men).

“Our Wellness Centre strategy includes building Wellness Centres that will house  the healing culture, recreation and sport for our Local Nations and our Anishinaabek Nation”, said Chief Norman Bone.

To achieve our housing Strategy  partnerships are required with Youth Build Canada, and FNT2T Build 101.

We are acting on recommendations in the housing analysis completed in April 2020.  Given that the population growth exceeds the needs of the Local Nations, 1500 homes are urgently needed. achieved as a Treaty obligation and is part of the reconciliaction”, said Leroy Thompson Councillor Little Saskatchewan Anishinaabe Nation.

School Houses (schools) were promised in the Treaty.  We have our Local Nations requiring new schools and the remainder require repairs, and upgrades to accommodate for student growth.

We are calling for fair and equitable standards of funding for all members. Ancestral Law Development within Treaty 2 Territory is being worked on. Full Control over our school system and creation of school houses and Akinaamaadiiwin  through FNT2T Lodge/Centre (University/College) at Dauphin and Pinaymootang.

FNT2T has an overall strategic plan on Life-Long Learning. This plan attempts to unify our Local Nation schools through a school system (2014 Mandate) with learning, athletics and land-base focus.  We continue to move on virtual Anishinaabemowin (language) teachings. Our curriculum development for use by Local Nations and other education institutions, including a treaty learning kit has been developed through our structural readiness funds, however we are lacking resources to be able to be at an equal player in education.

“An economic development fund is required and being worked on to begin our first steps to serve the Nation-based interests in the protection and promotion of natural stewardship rights”, said Chief David LeDoux, Gambler Anishinaabe Nation.

Land, resource and water protection through shared responsibility and management by Local Nations and FNT2T along with Canada and Manitoba/Saskatchewan is required.

“The Natural World is central to our peoples and future.  Our connection to the Creator is through the Natural World.  Negative climate change impacts must be addressed on immediate response and crisis facing our peoples”, said Chief Barry McKay, Tootinaowaziibeeng Treaty Reserve.

The matter of peacemaking and developing policing options, capacity and analysis is deserving of fiscal commitment.

“The issue of racism and a lack of culturally appropriate and culturally responsive policing services for Local Nations is impacting the public safety and the overall quality of life for our population”, Chief Cameron Catcheway, Skownan Anishinaabe Nation. 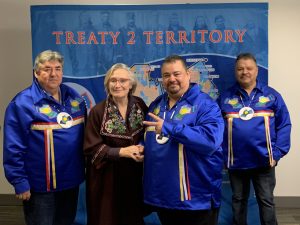 Next steps are key to advancing reconciliaction: To lead a bilateral table to develop recommendations about benefit sharing of renewable and non-renewable resources that are managed by the Manitoba and Saskatchewan  Provinces and Government of Canada. It was also strongly agreed that a Queens representative from the Privy Council be part of this mandate.  And subsequent plans include that every Ministry within Canada’s government commit Senior Officials to work toward transformative change and  a new funding approach under the Treaty-Crown Bilateral process in order to achieve ongoing and evolving jurisdictional matters.