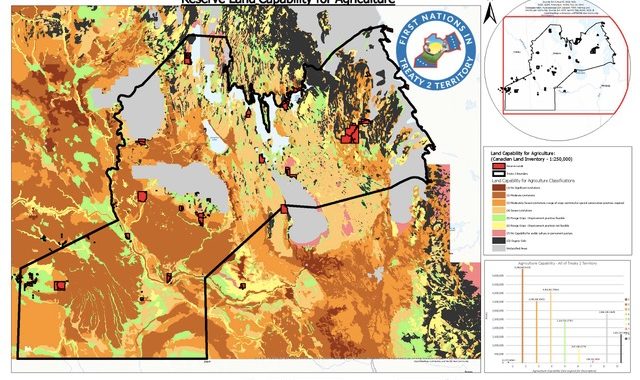 Treaty 2 Territory – Our Government of First Nations in Treaty 2 Territory (FNT2T) wrote to you and your Government on September 11th, 2020 with a workplan and budget to support the Care and Protection of The Natural World Circle reconciliaction plan.  In the letter we advised that we are a collective that is advancing our inherent right of sovereignty, self-determination and governance over the lands of the Treaty 2 Territory.  The treaty relationship with the Crown has not been honoured, implemented properly or fairly by the Government of Canada.  We are asserting our inherent right to govern our territory with our assertion of ‘Unfinished Treaty Business’. We were promised and agreed to fertile lands when we were ready to farm and never received it. We were assured by the Queen’s representatives that what she was offering was above and beyond what we already had. After 149 years of the Treaty relationship, it is clear this has not been the case and the reverse is true.

In our treaty process we are each sovereign and equals with neither side being asked to relinquish its sovereignty. Canada’s Indian Act was then enacted without discussion or agreement.  The illegal Natural Resource Transfer Act (NRTA) purported to unilaterally transfer our land and resources to the provinces is contrary to our treaty relationship and Canada’s fiduciary duty owed to our Anishinaabe. The transfer was subject to the trusts established to protect the Anishinaabe.

The rights of the Anishinaabe have been rendered to having no meaning.  Our land inventory indicates Eighty two percent of our lands in our territory have been reduced to private occupancy giving us no access, so what good is a right if we have nowhere to exercise.  Our rights were never intended to be stolen from us. Non-indigenous hunters and fishers continue to reduce resources in our territory so that restrictions are placed on our inherent right. The crown has failed to honour our treaty relationship.

As your government makes strides to implement legislation to fulfill UNDRIP, it is imperative the wrongs are recognized to begin the proper steps of ‘reconciliaction’. Reconciliaction, means Action based and Anishinaabek prosperity will only be accomplished by having the Anishinaabe in control of our territorial lands. The Mikisew Decision reminded the crown, the Treaties were the beginning of a relationship and not the end.

Canada has continuously maintained that it is; “Committed to improving the quality of life of Canadians by ensuring the country’s abundant natural resources are developed sustainably, competitively and inclusively.”  The lands and resources of the Anishinaabek have never been shared properly.

We are seeking compensation for all of the resources extracted and passing through our territory.  Pipelines, oil and other resources that have been taken from us.  Our Knowledge Keepers continue to tell us that the depth of the plough was the only thing ever discussed to be shared with the settlers.  The spirit and intent of the treaty has not been honoured by Canada.  We do not require Canada to give us anything that already is not ours, rather FNT2T is prepared to share the $600 million dollars in resources being taken or going through our territory yearly.  Going back to 1871, we can negotiate the extraction of resources through compensation and turning our lands back to the original way.  Our treaty allowing the Crown to share our territory had nothing to do with the extraction of natural resources without consultation, accommodation and informed prior consent.

True reconciliaction will be accomplished only when Canada recognizes the original intent of treaty which is our sovereignty over the lands of Treaty 2 Territory just as our ancestors acknowledged yours at the making of Treaty.

We feel that our fundamental need to have the land issue resolved has not received adequate attention and we are of the firm belief that it is the key to true reconciliaction. Our relationship with the land is similar to a bond between mother and child and no relationship is stronger.

Nothing about us, without us,