Councils, newsGoverning Council meets to discuss living in accordance with Anishinaabe governance and law-making in the Nation’s Territory

Treaty 2 Territory – On Thursday 14 January 2021 the Governing Council held a virtual meeting to discuss governance and law making as part of the continued Nation building to protect and promote the rights and interests of the Territory. The law-making process lies within the duty and obligations of the Nation who made the Treaty with the Crown. The Anishinaabe Niigaaniing principle “Wiisaakodaadiiwin Gizhibaabwewin” the united circle embodies our capabilities to pursue our own objectives —–political, economic, social, cultural—-effectively. 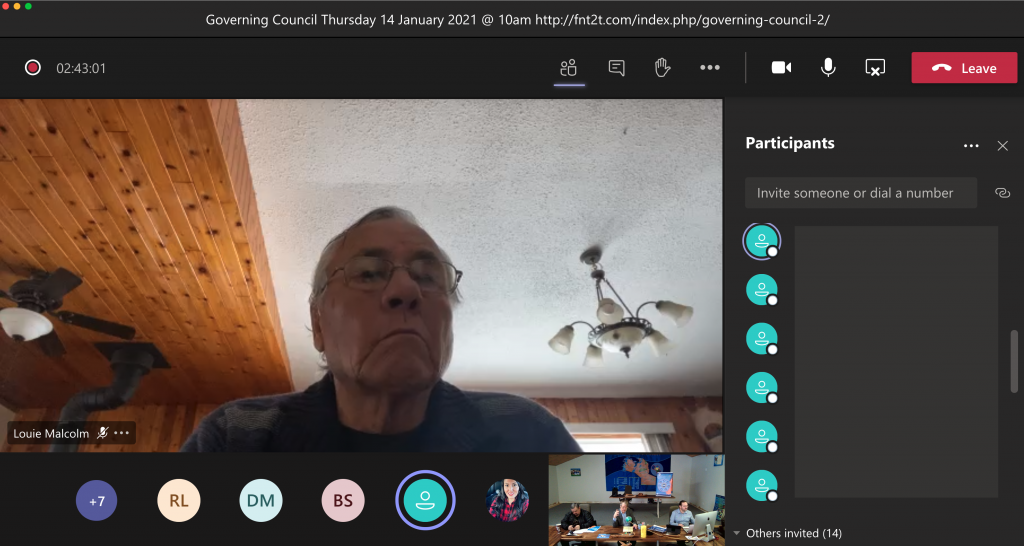 The opening statements set the tone for the session and this Niigaaniiwin direction forms the basis to breathe life into the Nation’s agenda and resolutions.

To kick start the first Governing Council for 2021 the Keepers within the governmental and administration of FNT2T presented reports based on local nation led governance, treaty implementation, progress on government-to-government relationships with Canada and administrative policy making that is currently underway within the Government of FNT2T.

The work being done under the RIRSD – FNT2T/Canada table currently has expanded from the term sheet that was developed to guide the process moving forward.  The current 10 sections in the term sheet aims to structure the acknowledgement and governance agreement, unfinished treaty business, the seven circles and other areas that may be agreed upon.

Under the RIRSD process a co-developed process forms the basis for both the Government of First Nations in Treaty 2 Territory (“FNT2T”) and the Government of Canada (“Canada”), to identity rules and interests for engagement which are instrumental under each respective mandates. These preliminary meetings have set up negotiations priority matters that reflect the obligations of the parties under the paramount Treaty-based relationship. This process does not include talks with Manitoba or Saskatchewan as the responsibility lies within the federal crown to bring the provinces into the political fold.

The Political Circles with Canada’s Ministries are taking shape as the Governing Council builds on meetings from 2020. All efforts to dialogue and debate with Canada will continue to diversify within the next few weeks.

The trust and treasury create an environment to manage the 21.5 million acres and the monies within the Government of FNT2T.  Empowered and capable governance, the objectives of the Treasury offer’s these strategic directions;

The Government of FNT2T has advanced with a sovereign administration. Our collaborative process requires performance excellence to accomplish inherent sovereign-based goals. Our administration receives full support and direction from our Councils.

Our day-to-day operations function under sovereign administration guided by the financial treasury process. We have successfully separated and defined the political governing role from the administration arm within our Government, The Nation, and Treaty 2 territory through this organized and effective governing approach, our four core areas of administration are: communications, finance, governance, and human resources.

The Keepers continue to help move the Nation’s agenda forward by actioning resolutions that have been passed by the Grand Council and Governing Council. This fundamental change is envisioned to best fit with the defence of sovereignty and includes everyone in Wiisaakodaadiiwin Gizhibaabwewin.

The Implementation of Treaty and Unfinished Treaty drives our self-determination to uphold our position as stated in the letter issued to Canada’s Prime Minister.  Canada’s response comes at a time when tougher decisions need to be made about jurisdictional powers over lands. Canada’s communique articulated that they will continue to build on initiatives with the special claims, specific claims and RIRSD process.

While these tables can facilitate meaningful discussions, the Unfinished Treaty business and the full scope of Inherent Sovereignty and Anishinaabe legal traditions may be beyond what Canada has planned for under its current Trudeau government.  It should be noted that in the event we find ourselves at a political impasse that the litigation route may be contemplated as an option to ignite true reconciliaction. It is our aim to ensure that our Anishinaabe way of life does not get interpreted out of way during these interactions with Canada or Manitoba.