The Jay Treaty of 1794 was negotiated between the Crown and the United States, to prevent any further conflict.

When the Europeans landed in North America, they encountered Nations with their own people, territories, governments, and laws. The newcomers entered political, military and economic relations with those Nations by Treaty, recognizing their rights.

The American Revolutionary War led to the creation of the United States of America and a boundary between the United States territory and British North America. The war ended with the Treaty of Paris in 1793, but that treaty left several issues unresolved, including the location of the boundary.

In 1794, Britain and the United States entered a new treaty, known as the Jay Treaty after Chief Justice John Jay, the American negotiator. It was a treaty of “friendship, commerce, and navigation.” Article III of the Jay Treaty provided for free border crossing rights for United States citizens, British subjects, and “the Indians dwelling on either side of the boundary line.” Indians were also not to pay duty or taxes on their “own proper goods” when crossing the border.

The treaty also guaranteed the Indigenous Peoples the right to cross the border without any hassle or having to pay duty. This right is recognized in Article III of the Jay Treaty, also known as the Treaty of Amity, Commerce and Navigation of 1794 and subsequent laws that stem from the Jay Treaty.

It is this treaty that the Mohawk invoke today in their clashes with the government of Canada. Canada Customs says they are smuggling. The Mohawk say they are exercising their ancestral and legal right as a Sovereign Nation that extends both sides of the border.

Territories in North America when the Jay Treaty was signed. 3/4 of the continent and half of the United States were still under the control of Indigenous Nations 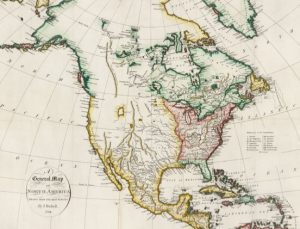 Article III states “It is agreed, that it shall at all times be free to His Majesty’s subjects, and to the citizens of the United States, and also to the Indians dwelling on either side of the said boundary line, freely to pass and repass, by land or inland navigation into the respective territories and countries of the two parties on the continent of America, (the country within the limits of the Hudson Bay company only excepted) … and freely carry on trade and commerce with each other.” Article III of the Jay Treaty declared the right of “Indians” (Native Americans) as well as of American citizens and Canadian subjects to trade and travel between the United States and Canada, which was then a territory of Great Britain. Over the years since, the United States has codified this obligation in the provisions of Section 289 of the Immigration and Nationality Act of 1952, and as amended in 1965. As a result of the Jay Treaty, “Native Indians born in Canada are therefore entitled to enter the United States for the purpose of employment, study, retirement, investing, and/or immigration”. Article III of the Jay Treaty is the basis of most Indian claims.”

Today, if you were born in Canada and have at least 50% Indigenous blood, you may be entitled to certain rights and benefits in the United States.

In 1812, Wabasha (Waa-Pa-Shaw), Dakota, Captain and War Chief (1765/77 – 1836), was chief of a Kiowa tribe of the Mdewakanton and was highly respected by the Dakota. Wabasha led a strong contingent of Dakota warriors to Fort St. Joseph near Sault Ste. Marie to join other Indigenous Nations warriors. After the Treaty of Ghent, Wabasha continued to be an important spokesman for the Dakota and his people’s rights against growing American expansionism.

In 1815, the Treaty of Ghent between Great Britain and the United States of America, the rights of the Indigenous Nations were mentioned, and their people were referred to in a manner that indicates that they were distinct from the citizens of the United States and the subjects of Great Britain. The right to pass and repass freely throughout traditional territories regardless of the border between Great Britain and the U.S. was confirmed and recognized in that Treaty and it had been in the Jay Treaty of 1794.

In 1846, the Oregon Treaty sets the 49th parallel as the boundary between Canada and the USA (Medicine Line).

Today, the government of Canada refuses to recognize the Jay Treaty because it was signed by the British Crown, which is an entity that preceded the establishment of Canada. A somewhat surprising assertion given the fact that Queen Elizabeth II is Canada’s Head of State and graces their $20-dollar bill.

Because Indigenous sovereignty predates the US and British/Canadian political regimes it is possible to consider the current international borders as temporary interruptions and transgressions of long-standing Indigenous rights. Chief Dean Sayers of Batchewana First Nation, Ontario expresses such a view when he calls Canada “the visiting government”.