Treaty 2 Territory – On March 2, 2021, the FNT2T Local Nation Helpers met at the conference centre in Pinaymootang Nation to discuss law development and nation engagement. Local Nation Helpers gave updates on the law development and engagement of the members in developing each nation’s constitution (first law). Engagement continues in each nation through hard copy surveys, online surveys, phone call interviews by the local nation helpers. During this year, the local nation helpers will be asking all the members in each nation for their input on how their constitution is developed and what they think should be included in it.

Along with the constitution development, there is also engagement sessions and surveys asking for the input of the knowledge keepers as it relates to the use of the land in the past and now in the present. It is important to capture and record the knowledge keepers and carry that knowledge forward to the next generation. Child Family law development is also another area of importance as it relates to keeping our children home. There will also be engagement sessions and surveys on how we want to raise our children in our own way. Please contact your Local Nation Helper for more information on the upcoming engagement strategies for each nation. 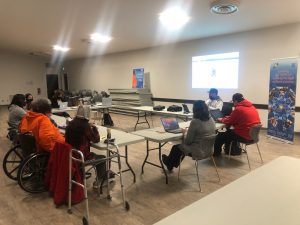