blog, Circles, Nation and Economic Development, newsFNT2T Continues Talks with Canada on Peacemaking and the Inherent Right to Govern 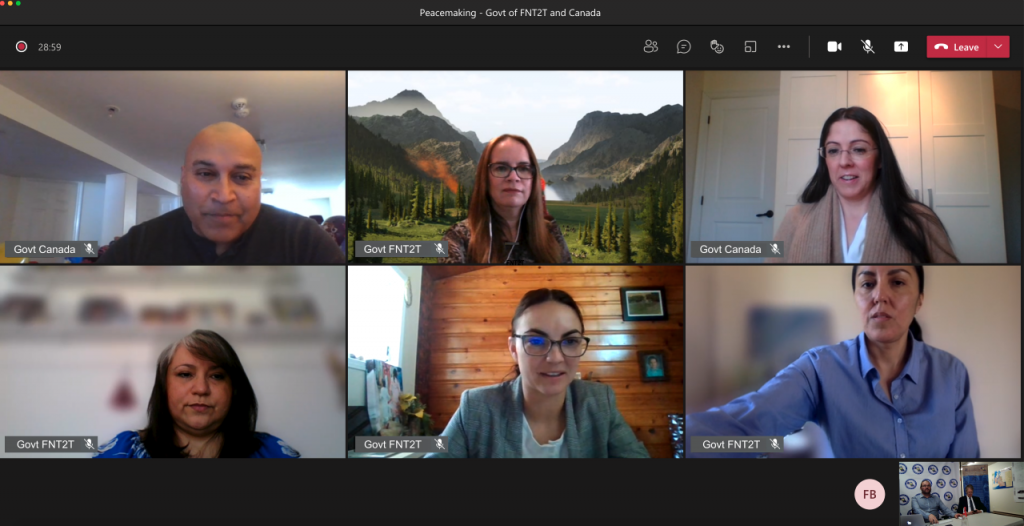 On April 6, 2021, the Treaty 2 Territory (FNT2T) government continued talks with Canada regarding Peacemaking, the Peacemaking Work Plan 2021-2022, and Canada’s recognition of First Nation’s Inherent right to govern. FNT2T provided an update on the progress to date including new team members. The work plan was presented for the upcoming year which includes community engagements and capacity building. Lastly, Canada’s representatives discussed Canada’s approach to implement the inherent right thier self-government policy.  FNT2T reminded Canada that they will not be following Canada’s one way policy during this process.

“It’s time after 150 years, our inherent right to govern ourselves is by ourselves”, Government of FNT2T.

The meeting began with updates including introducing the new team members, Jennifer Meixner and Kim McPherson, and their impressive expertise they bring to the table. FNT2T and Canada discussed a new way of moving forward (formerly known as a Aboriginal Justice Agreement) and the need to proceed with Peacemaking while leading up to negotiations with the Governing Council and Canada’s Ministers. FNT2T explained that there is a lot of work that needs to be completed to make Peacemaking a high-quality functioning system. Therefore, as discussions continue, FNT2T will move forward with the creation of a territorial Peacemaking System. FNT2T updated Canada on the Onankonehkawin Law and informed Canada that leadership from the councils are involved in the development and review of Onankonehkawin.  Chief Cameron Cactheway, Skownan Anishinaabe is the Niigaanii for the Peacemaking Circle.

FNT2T presented the work plan for the upcoming year which includes engagements, capacity building and building the Peacemaking Circle (replacement of Canada’s court system in T2T) . They were informed that nation engagements are beginning this month and will include community and urban sessions. The engagement sessions are critical in ensuring that the grassroots people have a voice, and they are part of the process. Historically, the Anishinaabe Nation people had systems enforced on them and FNT2T does not want to repeat that mistake. Peacemaking recognizes that all is connected; the hurt of one is the hurt of all, and honour of one is the honour of all. Upon completion of the engagements, the positions, policies, and procedures for the Lynx, Deer, and Eagle Circles will be documented.

Canada’s representatives discussed Canada’s approach to implement the inherent rights to self-government. They provided information regarding what the limitations and opportunities are regarding the Peacemaking Agreement. The Peacemaking Circle (Court system) was discussed and the functions of the Peacemaking Governing Circle. The goal for Canada and FNT2T is to work collaboratively on the next steps.

In conclusion, the meeting between FNT2T and Canada was productive and hopeful that the next steps will be completed and be supported by both governments (FNT2T/Canada). It was stated that FNT2T’s Peacemaking System can be a model for the rest of Canada as it focuses on healing and wellness. The current system that is based on punishment has failed the original people of turtle island.