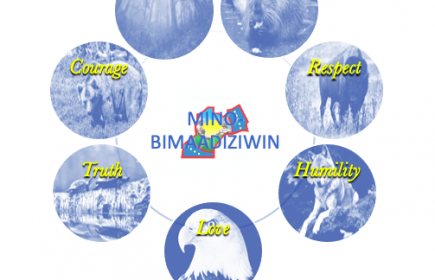 Treaty 2 Territory – Prior to arrival of the current LLL Keeper at FNT2T, a Territorial Education Law (Act) was drafted by FNT2T leaders and councils. The amazing work of the FNT2T Peacekeeping Circle in centering Anishinaabek teachings as law has inspired other FNT2T Circles to do the same, including Life Long Learning.

LLL has drafted a Territorial Education Law concept that is based on the Seven Sacred Teachings (Laws). This draft concept is focused on the education rights of Anishinaabek children, youth, and peoples and centers Anishinaabek values.

The drafted Seven Teachings Education Law concept has four laws under of the seven teachings, which is representative of the Four Directions. There are 28 general (draft) laws in total, corresponding to total days in each of the 13 Moons.

The draft laws set a standard for those involved in Anishinaabek education based on the Seven Sacred Teachings (laws): Love, Truth, Respect, Honesty, Humility, Wisdom, and Courage. Each draft law is general in nature as to capture further vision for Anishinaabek education that centers Anishinaabe identity. Most if not all parents and caregivers want Anishinaabek children and youth to know themselves and where they come from in a meaningful way that nourishes the mind, body, emotions, and spirit allowing them to walk in both worlds as to strengthen and advance the Anishinaabe Nation.