The Government of First Nations in Treaty 2 Territory (FNT2T) is expressing profound sadness, and solidarity with all First Nation relatives across Turtle Island after the reeling discovery of the remains of 215 children on a former residential school site in Kamloops, British Columbia.

“For the past week, we have been reliving one of the most somber periods in our history as Anishinaabe people,” said Treaty 2 Grand Chief Eugene Eastman. 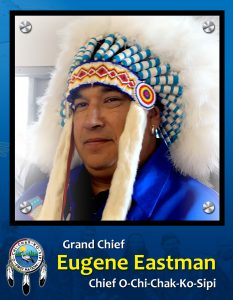 “The Indian Residential School system has had systematically undermined our Nations across Canada and disrupted families for generations, severing the ties through which Anishinaabe culture is taught and sustained, and contributing to a general loss of language and culture”.

If those atrocities were not enough, now the remains of the innocent children were confirmed through the help of ground penetrating radar. The Language and Culture department of the Tk’emlups te Secwépemc First Nation in BC, helped guide the project to ensure it was done in a respectful and culturally appropriate manner.

In a news release, Chief Rosanne Casimir confirmed the alarming truth of the preliminary findings, revealing the remains of students of the Kamloops Indian Residential School, where children as young as three years old were discovered.

“The Indian Residential School system was created for the purpose of removing Indigenous children from the influence of their own culture and assimilating them into the dominant Canadian culture, ‘to kill the Indian in the child’. That’s evident as the TRC report concluded that the school system amounted to cultural genocide” stated Grand Chief Eastman. “These innocent children were stolen from their families and their Nations under the authority of the Canadian government, and never returned home. The anger and grief I feel right now is beyond measure”.

The National Centre for Truth and Reconciliation has created a memorial register of the more than 3,200 children who died at residential schools https://nctr.ca/memorial/, and that number continues to grow as records are located with the assistance of the ground-penetrating radar technology. According to the Truth and Reconciliation Commission of Canada, child abuse was institutionalized and normalized at residential schools, and many children were also starved and experimented on.

Right now, with it being Indigenous History Month, “Each and every Canadian needs to take that step to learn about IRS and the generational trauma it caused. As a Nation, we all need to pause and remember the lives of those children discovered in Kamloops, and pray to ask Creator to guide them home, and to bring peace to their families”, concluded Grand Chief Eastman.