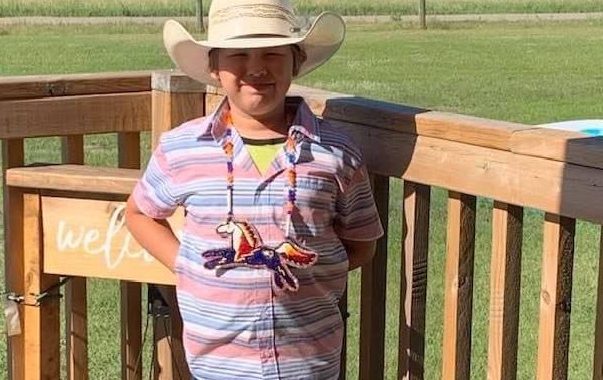 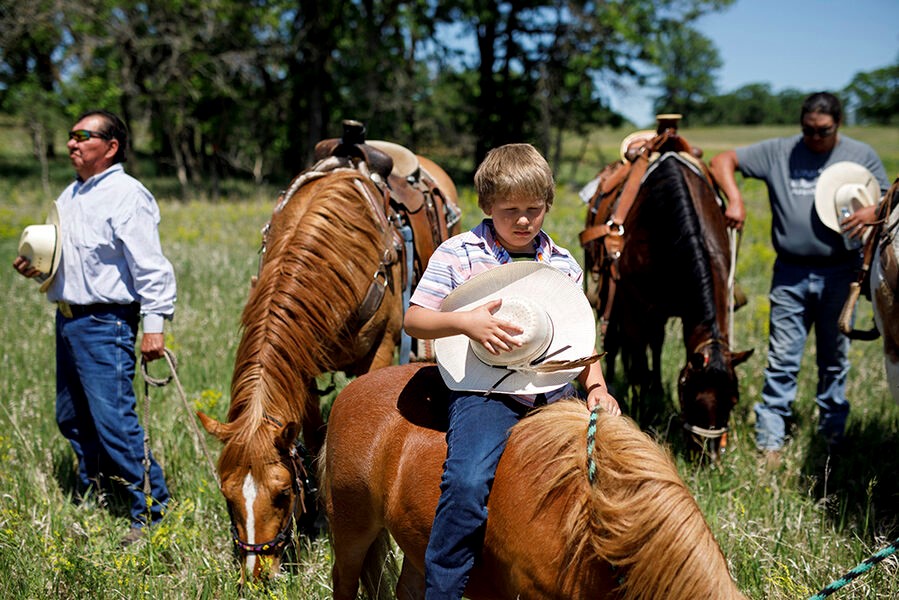 Photographed here, Jase holds his hat to his chest atop his miniature horse Charlie while drummers perform at the former Brandon Indian Residential School site. Jase is a member of the Sioux Valley Dakota Nation; a self governing Nation, located in Treaty 2 Territory (however they are not signatory to any treaty). The unceded territory is home to his grandfather Tony Tacan; a councillor for the Nation. Jase’s grandmother Leaha Tacan (nee Mancheese) was born and raised on the Ebb and Flow First Nation.

This was a day that Jase was able to spend with his grandparents, and extended family. He was able to honour his culture, and traditional ways. He was able to go home with his family at the end of the day to experience love, and nurturing by his parents and grandparents; an opportunity denied to so many young children who were taken by the Canadian Government and forced into the residential school system.

On this hot June day, Dakota Nation Unity Riders from Sioux Valley Dakota Nation and support riders rode to the former residential school site from the Grand Valley Provincial Park Campground in honour of residential school victims and survivors. A ceremony was also held at the former school site, now owned by the Sioux Valley Dakota Nation, where survivors from the Dakota Nation attended.
Following their 9 kilometer trek with their horses in 28°C heat, they gathered to remember the 104 Indigenous children whose unmarked graves sit near the site of the former Brandon Indian Residential School just off Grand Valley Road.
Councillor Tacan, teamed up with Travis Mazawasicuna, Head of the Unity Riders from Sioux Valley. Together they managed to organize riders and their horses to make the journey to site. “Right now, First Nations everywhere are making this awareness a goal. We need to keep that momentum going so this isn’t swept under the rug. Now, every First Nation across this country should contribute something. And in some small way everything works”.
There were more than 12 horses, riders and support teams on the ride. An elder wore a traditional headdress and clothing to lead the ride.  While weaving his way around horses and riders, a Dakota Nation member carried their smudge to bless the area of the small gathering. Tacan said “See. Everybody’s coming together without being told, they want to contribute. That’s a welcome sight. We’re just bringing awareness to the issue. We don’t want anyone to forget”.
In addition to Tony, and Jace, and Travis Mazawasicuna, was Vince Tacan, Carl Mazawasicuna, Ann Marie Tacan, Keith Tacan, Ashley Bounie, Skylynn Sigurdson,  Skylynn Sigurdson, and Sylvia Tacaan. They were honoured with the company of Elders, and Drummers.

When Tacan hears how some people want to leave the issue of buried Indigenous children and unmarked graves in the past, he bristles. “Yes it was in the past, but we cannot allow it to be forgotten. It’s a very bad moment in history, and we need to create awareness so it never ever happens again. We have to make sure that these children are never forgotten. The descendants of these children need to know where they are” he said. 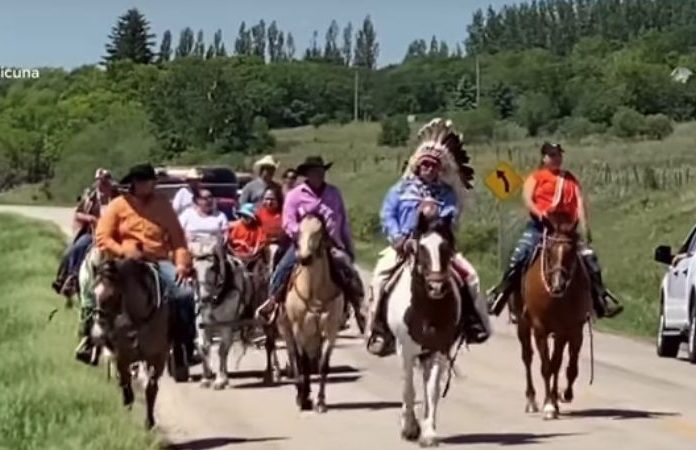 In Dakota culture, horses provide a sacred connection to healing. Sunkawakhan; is the Lakota word meaning “holy dog” and a word used by the Dakota used to describe a horse. Their role in today’s event was more than just a mode of transportation; they were there to help bring healing.
The Sioux Valley Dakota Nation is abundant in its culture, language and traditions. The ability to continue with the traditional values of the Oceti Sakowin will only bring good things for their Nation through the spirit of sharing and helping each other now and for generations to come. All teachings that little Jase Tacan will hold close to heart and pass down to his children, and someday, they will pass down to theirs.

Thank you to the Tacan and Mazawasicuna families, and the Sioux Valley Dakota Nation for sharing this story with us.  Our Government of First Nations in Treaty 2 Territory will continue to stand with you. We will continue to help bring awareness, and we will continue to pray for the 104 children to make their way home along with the 215 in Kamloops, and all children who were taken as part of this colonial genocide.