The Ahjijawk will hear appeals on criminal, civil, and youth matters. The Ahjijawk will hear from the individual, review the laws broken, review the wellness plan, and inform the helper judge on their decision. The Judge is there for consultation and ensure that the decision is aligned with the CFN Law, Peacemaking Law, and Criminal Code of Canada. The Ahjijawk is also home to the Child Family Nation (CFN) Tribunal that will make the final decision on CFN matters.

The Ahjijawk Circle recognizes that Anishinabek recognize grandmothers as the final decision makers. When the grandmothers speak, all listen without question. Their position as the decision makers were displaced when the Indian Act came into effect. The while males that worked for the government did not want to talk to the women as they had patriarchy and hierarchy worldviews. As a result, the Chief and Council became the decision makers of the Local Nations. Peacemaking will ensure there is a balanced approach to appeals, as the grandmother’s and helper judges will be involved in appeals in the Treaty 2 Territory. 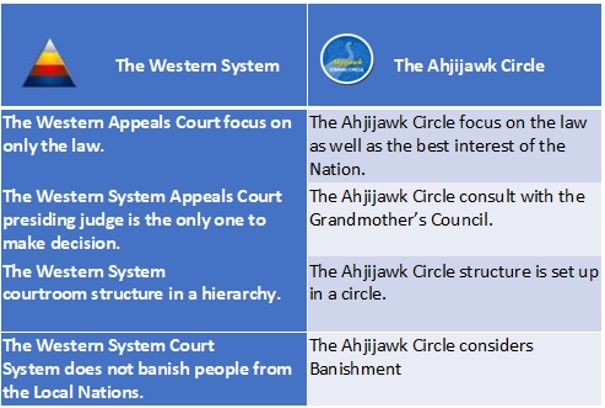