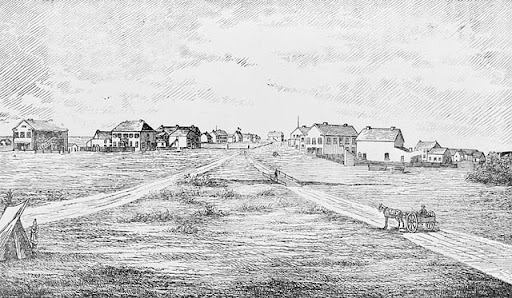 Treaty 2 Territory – Manitoba House was a fur-trading post established on the western shore of Lake Manitoba, south of The Narrows, in the late 1810s or early 1820s. Located near today’s community of Kinosota, in the Rural Municipality of Alonsa, it was one of the first inland posts of the Hudson’s Bay Company. It was a modest facility. A map at the Archives of Manitoba shows that, in 1891, there were six buildings at the site but no palisade around them. A 1½-story log building and attached kitchen was the home of the trader, surrounded by a garden, and four other outbuildings were a trading store, provision store, fur store and general warehouse, and flour store. Nearby was a road from the new community of Westbourne to the south and, on Lake Manitoba, a wharf for people arriving by water.

Manitoba Post, or Manitoba House was originally called Doubtful Post when it was established by the HBC in the fall of 1797 and only operated for one year before closing.  Doubtful Post was reopened in 1800 and given the name Manitoba House.  This time it stayed in operation until 1824, when it (along with Fort Dauphin) was closed, and trade redirected to Fort Pelly as part of the HBC’s cost-cutting measures around this time.

Manitoba House is where Treaty 2 was signed on August 21, 1871. The Lieutenant Governor of Manitoba, Adam G. Archibald, brought along his family to this historical event. Chiefs and headmen were named by the assembled Indians. These officials were authorized on their behalf to conduct the negotiations and to sign the Treaty. Chiefs and headmen were to become responsible to Her Majesty for the faithful performance by their respective Bands “of such obligations as shall be assumed by them.” The Chiefs named were Sou-sonse (Little Long Ears), “for the Swan Creek and Lake Manitoba Indians”;  Ma-sah-keey-ash (He Who Flies to the Bottom) and “Richard Woodhouse, whose Indian name is Keweetahquinnayash (He Who Flies Around the Feathers), “ for the Indians of Fairford and the neighbouring localities”; Francois or Broken Fingers “for the Indians of Waterhen River and Crane River and the neighbouring localities” [Francois, or “Broken Fingers” had represented the Crane River community in Treaty making. He died shortly afterwards, and his son, Penaise, became Chief Penaise, and was employed by the Hudson Bay Company Manitoba House Post]; Mekis (The Eagle) or Giroux, “for the Indians of Riding Mountains and Dauphin Lake and the remainder of the Territory hereby ceded”.

Later after Treaty 2 was entered into, the Ebb and Flow Reserve was created to the north where it is to this day. Hebron Moar was the community patriarch and considered to be the best interpreter of the area. The first Indian Agency was located here after Treaty and the building was later bought by JJ Wilson who oversaw the Manitoba House Post for HBC. François or Broken Fingers was one of the signers that had signed the treaty with the crown’s representatives.

Manitoba House closed in the fall of 1910 after a long period of decline. This ended a 114-year-old story. The buildings were used by a series of families as a dwelling and store. In 1928, the buildings were sold, and most were moved to a farm north of Alonsa. The kitchen part of the residence was moved to a nearby spot, and some of the remaining logs were used to build a church at Reedy Creek. Through much of the 20th century, only a few depressions in the ground marked the former site of Manitoba House. In the early 1970s, a group of local residents working under the auspices of the Manitoba Metis Federation constructed a replica of the former fur trade post. At the time of a 2018 site visit, three abandoned and degraded buildings were seen.

Why was a treaty required in this time and place?

The treaty defined the lands that the Natives were to possess in the form of reserves, but also indicated which lands they were to surrender to the British Crown. The Natives were to receive an allowance from Her Majesty’s coffers, as well as a yearly allowance of items such as blankets, clothing, twine, or other goods that the Natives might require, and the treaty was written to record the details of this agreement. The treaty also established that there were to be reserves created, as well as a school maintained by the British in each reserve. The main objective of the treaty was for the British Empire to expand towards the West without creating violence between the British settlers and the First Nations. This treaty enabled the British Crown to expand its territory while controlling First Nations peoples.

Which First Nations were included in this treaty?

The First Nations included in this treaty were smaller tribes of Chippewa Natives located in Manitoba. Tribes included were as follows; the Sou-sonse people of Swan Creek and Lake Manitoba, also known as Little Long Ears; the Ma-sah-kee-yash people of Fairford and the neighbouring localities, also known as he who flies to the bottom; a man by the name of Ke-wee-tah-quun-na-yash whose actual name was Richard Woodhouse, also known as he who flies around the feathers; the Francois people of Waterhen River, Crane River and the neighbouring localities, also known as Broken Fingers; the Mekis (the Eagle) or Giroux people of the Riding Mountains and Dauphine lake. All these tribes had been located in the Manitoba region and had their own way of life. These tribes who were part of the Chippewa Natives were part of a much larger group of the Algonquian native tribe. Chippewa is also known as the Ojibway Natives. In British North America by 1902, there were around 30,000 of these native people.

What did these people want from the treaty process?

The Natives of this treaty mostly wanted peace between the other tribes, peace between each other and an abundance of land to sustain their people. The Natives along with Her Majesty agreed that there would be no consumption or distribution of alcohol on the reserves, and it was strictly prohibited. The Natives wanted to be good and loyal subjects to the Queen, and they would also be law-abiding citizens to eliminate confrontation. With having land, the Natives would be able to have a school on each reserve whenever they wanted and they also would have enough land for each family to sustain a household of five.

What did the government want from the treaty process?

The government wanted to gain land for the crown from the First Nations who already lived in the desired area and to locate them to reserves. The desired area was tract of land stretching roughly from the mouth of the Winnipeg River up north to the mouth of the Berens River, then north and west to Lake Waterhen, then descending roughly southwest to the Moose Mountains in modern Alberta and reaching is most southerly extent at the U.S. border. The territory is bounded by borders bending sharply to the North and East, crossing Lake Manitoba and finally leading due east to connect to the mouth of the Winnipeg River.