Treaty 2 Territory – On August 24th the Children, Families and Nation (CFN), Earth Lodge, and Lead Keepers of Treaty 2 held a ceremony to bless and honor the CFN logo which was completed by Royce Catagas Jr. from Tootinaowaziibeeng.

Allen Sutherland, Waabishki Mazinazoot Mishtaatim (White Spotted Horse) blessed the CFN logo and the very important work moving forward with Children, Families, and Nation team.  He spoke about the vision and the importance of the sacred circle of life.

Ray Mousseau rendered a song in the Anishinaabe language which detailed the courage of the Makwa, we were very thankful for that.

Royce Jr. was gifted a Treaty 2 medallion and other gifts from the Lead Keeper and the CFN team.  Royce’s brothers and his parents, grandmother and cousin Scott Lynxleg looked on with pride. The morning ended with the giving of gifts and a meal (feast) together. 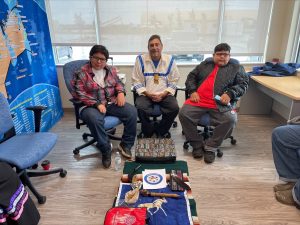 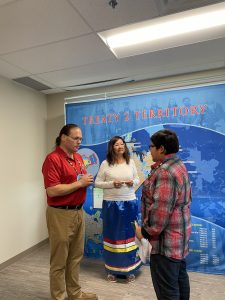