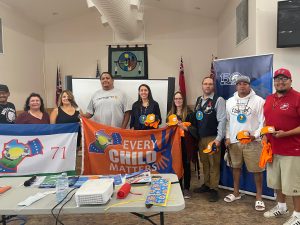 Treaty 2 Territory- Last week the Keepers of First Nations in the Treaty 2 Territory (FNT2T) met with the leaders and technical people of Kawacatoose First Nation. The meeting between the two Nations was held in Brokenhead First Nation. Kawacatoose First Nation people invited FNT2T to present on governance and the different Circles, including Peacemaking. At the end of the presentation, the Peacemaking Keeper along with other Keepers were invited to Treaty 4 to present on Treaty 2 Governance and Peacemaking.
The meeting began with entertainment as there as magic show by one of the presenters from Kawacatoose. The talent and magic shared was amazing and continues to stump the Keepers today. The Lead Keeper, Boh Kubrakovich, presented first on the Treaty 2 Territory Governance, followed by Ryan Sutherland who presented on Trust and Treasury Law. Allan Sutherland of the Earth Lodge spoke on the importance of Anishinaabe Knowledge. Karen Kejick presented on the Intergovernmental Relations, and Ray Mousseau presented on Administration.
The Peacemaking Keeper, Chantell Barker, presented on the Peacemaking and the Onankonehkawin. The presentation included the Anishinaabe Legal Framework, the Seven Circles of Peacemaking, and the process on creating and implementation of laws. The Peacemaking presentation was well received. There were a few questions including, “How long it took to create the model?”. The Peacemaking Keeper informed that it took 9 months. The second question was, “Can Peacemaking present to Treaty 4?”. The Peacemaking Keeper informed them this can be done as building alliances is important to FNT2T. The meeting concluded with gift giving, photos, and laughter. It was good day with the people of Kawacatoose First Nation.