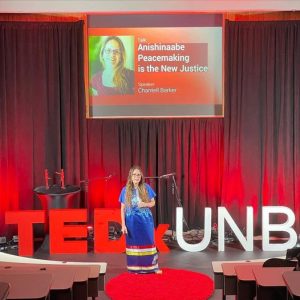 Treaty 2 Territory- On September 19, 2020, the Peacemaking Keeper, Chantell Barker, introduced Peacemaking to the world via a Ted talk in Fredericton, New Brunswick. TEDX is a non-profit organization devoted to Ideas Worth Spreading around the world. TEDX started as a four-day conference in California 30 years ago and has grown to support its mission with multiple initiatives and conferences across Turtle Island and around the world. The TED talk was called, “Anishinaabe Peacemaking is the New Justice”.
After completing a TEDX interview, the Peacemaking Keeper was selected to present in Fredericton this past weekend. The talk included Anishinaabe worldviews, the Peacemaking Framework, and the need to replace the current justice system. In addition, the TED talk included the failures of Manitoba Justice, and how it continues to oppress First Nation people in the Treaty 2 Territory. The talk provided stats on the over-representation of Indigenous people in Manitoba Justice (81% of youth incarcerated are Indigenous) and Manitoba CFS (approximately 11000 kids in care in 2018). The Peacemaking Keeper informed the audience that 60% of kids in care will have contact with the justice system as per the report done by University of Manitoba. As a result of these staggering numbers, it motivated First Nations in Treaty 2 to write their own Child, Family, Nation, and Peacemaking Laws.
The Peacemaking Keeper presented on the Anishinaabe legal framework, the Seven Circles of Peacemaking, and the Onankonehkawin. The Keeper explained that Peacemaking focuses on healing and restoring balance vs. the current justice system that is based on punishment. The talk included Anishinaabe governing systems that were in place prior to 1492 and how they were dismantled through the Indian Act. It was explained that traditional peacemaking system focused on restoring balance so Anishinaabe people can live by Mino-Bimaadiziwin (the good life).
The Ted talk was streamed live online and will be made available on TEDX’s YouTube channel. This TED talk will be accessible to the world. As a result, this may be the catalyst for other Indigenous groups to explore Anishinaabe Peacemaking as a possible system for their region. For Indigenous groups who may want to have a different system that is based on natural order, peace, harmony, and balance, Anishinaabe Peacemaking may be the solution.