The 1st period was filled with some fast paced, high scoring hockey.  Peyton Moneyas (Hollow Water First Nation) opened up the scoring at 4:05 to make it 1-0 for Selkirk.  Selkirk added 2 more before the Ice Dawgz responded with a goal on the power play by Tyson Barylski to make it 3-1, which was assisted by Kalen Guimond (Sagkeeng First Nation).

Selkirk Fishermen’s rookie Jordan Beaulieu (Kakakwekejeong Anishinaabe Nation), scored a beauty at the end of the first period to make the score 4-1 for Selkirk.

The beginning of the second period, the Ice Dawgz rallied and scored 2 quick ones in the first 2 minutes with goals by Kalen Guimond (Sagkeeng First Nation), and Ben Danielson with the assist going to Dyson Pelletier (Peguis First Nation).  The score was 4-3 for the Fishermen at the end of the 3rd period.

The 3rd period was filled with a lot of action and scoring chances at both ends of the ice.  However, the Selkirk Fishermen held off the Ice Dawgz attack for the 4-3 victory. 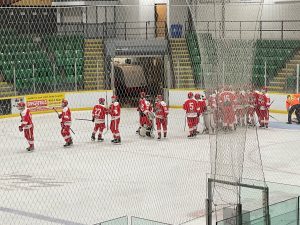 It was an awesome night of Junior hockey in Selkirk.  I’d like to take the time to acknowledge all the Anishinaabe players who are rostered on the Arborg Ice Dawgz and the Selkirk Fishermen.