Treaty 2 Territory- On November 4, 2021, The Manitoba Child Advocate’s Office released a report called “Finding the Way Back” that researched and reviewed 45 cases involving boys (12 and 17 years old), who died by suicide or homicide between 2009 and 2018. Of the 45 boys whose cases were reviewed, 37 were Indigenous — 35 were First Nations and two were Métis. The report looks at experiences that were common among the 45 boys, including caregiver abuse, poverty, parents who had substance use disorders, justice system involvement, gang involvement, and poor school attendance. In addition, the report revealed that 69% of the boys were in Child and Family Services care at one point, 76% had “problematic substance use”, 64% of the youth were involved in the justice system, 33% of the youth had gang involvement, and about half were hospitalized for a mental health concern.
These heartbreaking statistics are not surprising to the Peacemaking Keeper, Chantell Barker, who worked as a Probation Officer for 10 years for Manitoba Justice. During her time with Manitoba Justice, Chantell created Manitoba Justice’s First Culturally Appropriate Program (CAP). Creating this program allowed Chantell to travel across Manitoba from 2013-2016 to provide CAP to over 45 communities, including all Youth and Adult Correctional Centres. The participants were Indigenous adults and youth that were involved in the Justice system. CAP was a 4 series DVD program that showed her teaching CAP to a group of inmates in Headingly Correctional Centre. The program content included pre-contact societies, colonization, current conditions, and healing from the intergenerational impacts of colonization and trauma. It also included information on Suicide Awareness and Interventions.
During this experience, Chantell heard many stories of oppression, trauma, experiences from intergenerational impacts, addictions, racism and discrimination, and the pressures of gang involvement. As she traveled from one community to another, she started to recognize the patterns and impacts of colonization, residential schools, and the deliberate continued oppression made through provincial laws and policies. For example, Probation services created a policy that required people to phone in to report within three days of receiving a probation order. If they failed to do so, it was automatic breach of their Probation Order. For people, especially youth, who do not have access to a phone or live in a remote community with no cell service, they were set up to fail.
In 2015, the Culturally Appropriate Program was evaluated was recognized as an Informed evidence-based program by Crime Prevention Canada. Crime Prevention Canada released a publication called “Culture as Catalyst: Preventing the Criminalization of Indigenous Youth” 2017 by Melanie Bania PHD. The evaluation revealed that CAP was 96% effective in preventing the Criminalization of Indigenous Youth. Unfortunately, Manitoba Justice dismantled the CAP DVD program two years after the evaluation was completed. 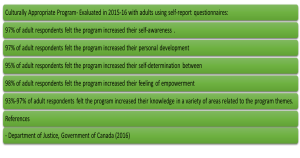 Therefore, Chantell who is now First Nation in the Treaty 2 Territory (FNT2T2) Peacemaking Keeper is taking her experiences and expertise in creating a Peacemaking System for FNT2T. Peacemaking’s goal is help the youth involved in the Child and Family Nation Services and Justice System to reach Mino-Bimaadiziwin (the good life).

“The colonizers cannot be the de-colonizers. That is why the Anishinabek in the Treaty 2 Territory must assert their sovereignty and inherent rights and administer their own social and legal system.”- Peacemaking Keeper

Chantell believes that the colonizers cannot be the de-colonizers. That is why the Anishinaabe people in the Treaty 2 Territory must assert their sovereignty and inherent rights and administer their own social and legal system. Systems that are based on healing, decolonizing, ending intergenerational impacts, and most importantly identity. Reaching Mino-Bimaadiziwin will result in reports like “Finding Our Way Back” no longer being released.