Treaty 1 Territory – The Turtle Lodge in Sagkeeng First Nation was built in fulfillment of a vision received by Elder Dr. Dave Courchene Jr. many years ago; these visions not only connect our Anishinaabe people with the Great Spirit, and the land. The Turtle Lodge in physical terms, also brings people together from all walks of life, from far and near. For Knowledge Keeper, Mary Maytwayashing, it is a place of Traditional teachings, Ceremony, Healing, and the sharing of the perspectives of the Original Peoples of Turtle Island on how to have a good and peaceful life.

Zoongi Gabowi Ozawa Kinew Ikwe, Grandmother Mary Maytwayashing, is the daughter of the late Leslie Maytwayashing, and Elsie Maytwayashing and from the Lake Manitoba Anishinaabe Nation. Mary and her husband Knowledge Keeper Robert, Zoongi Kabowii Miskoo Mushcotay Biishikii are both members of the The Turtle Lodge National Council of Elders and Knowledge Keepers (a network of Knowledge Keepers from diverse Nations across the country) Grounded in their traditional ceremonies, fluent in their original languages, in relationship with the land, and rooted in their Nations, teachings and traditions of their People, they are individuals who’ve worked and studied a lifetime, earning the knowledge that they now share willingly with young people of all cultures. Mary and Robert along with all of the Knowledge Keepers are the heart of The Turtle Lodge.

Mary and Robert have blessed our Anishinaabe Agowidiiwinan-Treaty 2 Government and Earth Lodge with ceremonies over the past few months, in addition to sharing and visiting with our  Care and Protection of the Natural World Circle. 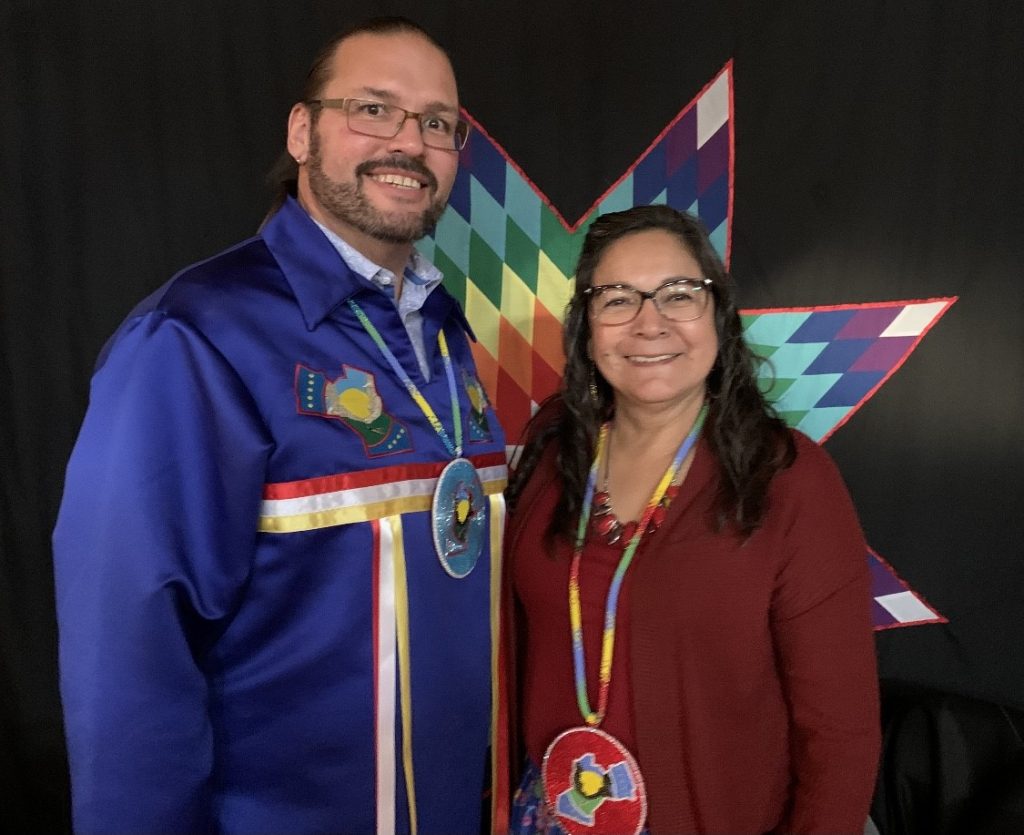 While at the Turtle Lodge last week for a ceremony to honour the visions of Dr. Dave Courchene Jr, our Treaty 2 Government Lead Keeper, Boh Kubrakovich-Kiniw gifted Mary with a red, beaded, Treaty 2 Medallion in recognition of “Abinoojii Kagekwewin” (Teachings for the children, which last forever and are related to our way of life, that come through the ceremonies by a Woman which reflect our relationship to our Mother Earth).

Giche Miigwech Mary for sharing your teachings, that yes – will last forever and guide our Abinnoonjiwaag, and Ikwe for generations to come. We are honoured to know you and Robert, and to call you our niijiwaaganag.