On behalf of our Government of First Nations in Treaty 2 Territory, we congratulate Ogiichidaa McLean on his successful election. We look forward to his leadership as we continue our duties as a sovereign-based, nation-based Government working to ensure Canada uphold the Crown’s honour and other nations and government by working with the Peoples of Treaty 2 Territory so that our rights and interests are protected and fully accommodated at all times. 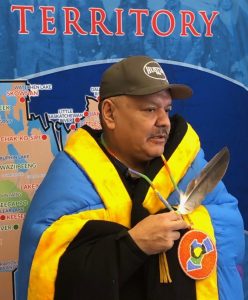 “Unity is very important to me. I am honoured to have been entrusted with the role of Grand Chief, as elected by my fellow Chiefs who were in attendance today. I am humbled and honoured to have been welcomed back to the table, and I look forward to the ongoing progress being made by the Government of Treaty 2 Territory. As Ogemaag, we all come together with the best interest of people waiting for us back at home. I look forward to the dialogue, and ongoing relationship with Canada in ensuring they work collaboratively with our government for our collective rights. I’m here not only for my Nation, but for the territory and our government” shared Ogiichidaa McLean.

During today’s Governing Council Meeting, acknowledgement was given to former Treaty 2 Territory Ogiichidaa Eugene Eastman who served in that capacity for two terms. It was an honour to have him in attendance today with all ten Ogemaag, and one proxy.