Treaty 2 Territory- The MINO OMBIGII”AA Law, has its roots in Sacred Law that has been kept by our people and does not change (not to compromise).  Sacred Law comes from the Creator through an ancient law-making process.  It is all that is bestowed upon us as traditional stewards of the lands, resources and all living things.  The bestowment assigns customary duties, roles, and responsibilities which include the safety and security of children.  The guiding body for the law has been the Women’s Council of Treaty 2. 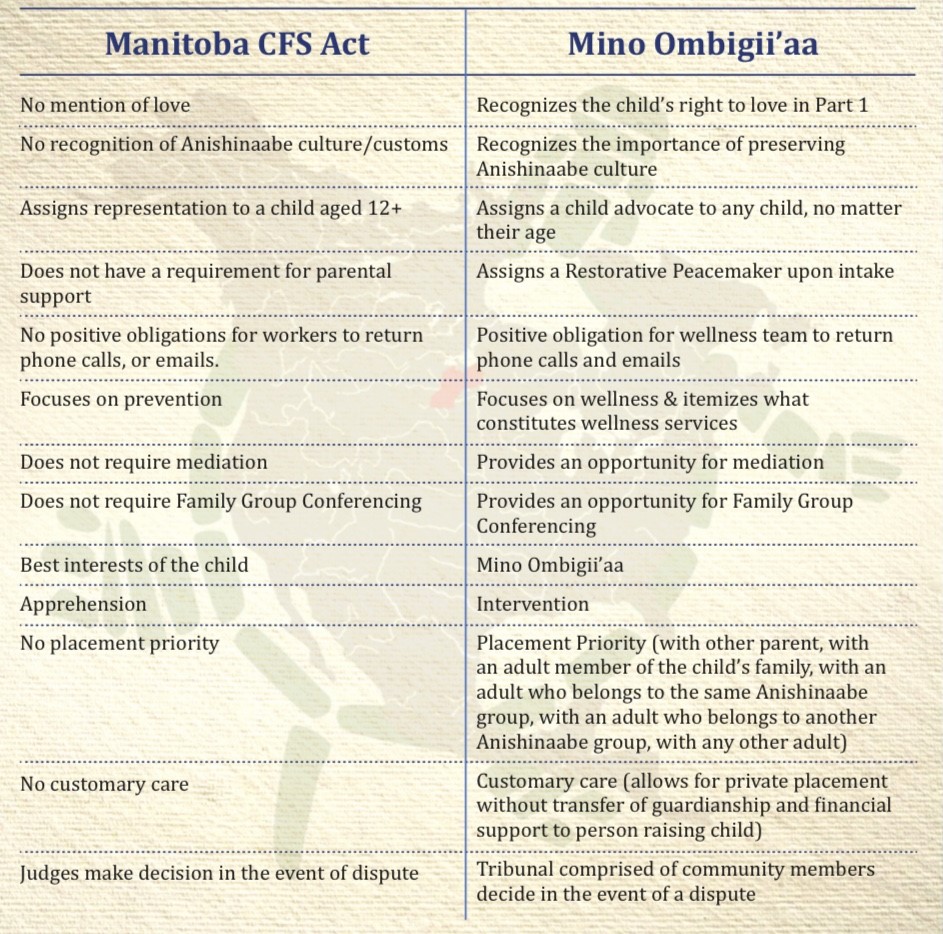 Substantively, the law that has been created at the Treaty 2 level are determined by the Nations and its members.  The Nation determines how the laws will be implemented, who has authority, and in some cases co-developed policies, frameworks and protocols to inform service providers.

Certain portions of the Mino ombigii’aa Law ~ Law of the children will be translated into the Anishinaabe language.  Part I – Inherent Rights of the Anishinaabe Child is completed and on to Part III – the Mino ombigii’aa portion which emphasizes Anishinaabe child rearing, nurturing, safety, and hope.  This includes relationships with family, extended family, informal networks of care, alongside formal systems such as education, health, housing, and communities.  It is important for everyone that the Anishinaabe child remains at the centre for the entire collective to remain a cohesive whole.

The CFN team has researched and reviewed many principles, processes, and best practices of which are incorporated into the Treaty 2 law.  One of the biggest challenges is the process of implementation in the face of interactions with provincial laws and conflicting jurisdictions.  Where this occurs, strong relationship-building with Nations and negotiations with Canada have been integral.

Various organizational representatives, agency employees and Nation members were also integral to the research in highlighting information that was not readily available to the public and providing insight into the future.

The process of revitalizing Indigenous laws relies heavily on continuous community engagement, particularly with Knowledge Holders, and individuals that would like to share in exchanging knowledge and experiences about governance, law, history, and relationships related to children and families.  The engagement portion of the CFN duties are considered to be 90 % complete by January 19, 2022.

Submitted By the Children, Families and Nation