Treaty 2 Territory – January, 2022 marks one year since the Peguis First Nation declared their intentions to enact a Child, Family, and Nation Law that will see Peguis granted jurisdiction to its members across Canada.

Peguis First Nation, signatory to Treaty 1, is located in the Treaty 2 Territory. Over the past 12 months, the draft law was presented to the members of the First Nation who were given an opportunity to provide feedback and discussion on the draft law. Within this one year time frame, Peguis has worked steadfast in pursuit to reach a coordination agreement with Canada and Manitoba.

On January 21, 2022 the Peguis First Nation hosted a “Coming into Force” Ceremony to Honour the Children, Families, and Nation Act.

Our Government of First Nations in Treaty 2 Territory Congratulate Chief Hudson, Council, and the Members of Peguis and their Nation on this successful milestone. The magnitude of work that you all have collaborated on will benefit children and youth for generations to come. Because of your tenacity, and determination and through this law the Peguis First Nation Child has the ascribed and inherent right: 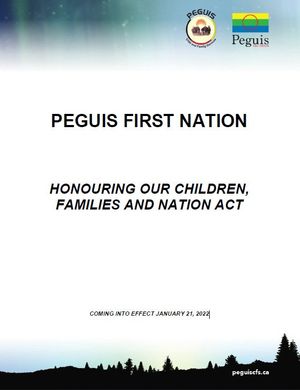 Miigwech for leading the way as we must all do our best to honour the lives of the sacred Abinoonjiwaag by creating new pathways that respect our children and entire Nations on Anishinaabe Akiing.