Treaty 2 Territory – The Treaty 2 Territory U20 Junior Hockey Challenge is striking a lot of interest!  The tournament is set for April 1, 2, 3, 2022 in Ebb and Flow and Peguis, Treaty 2 Territory.  Our allies at Treaty 1 in Peguis have partnered to bring you this amazing opportunity for elite level hockey players in the territory.

What is the T2T U20 Junior Hockey Challenge?

Simply put, it is our version of the world juniors.  We are having evaluation skates, and out of those evaluation skates, we ID players and enter them into a draft.  The draft which is tentatively set for March 30th in Dauphin, will be held at the Treaty 2 Government office.  We will be creating 4 teams, where we have Ogemaag (Chiefs) select 60-80 players for their respective team.  We do it this way so the teams are evenly matched.  The 4 teams that are selected will play in the tournament.  Also, this is a FREE Tournament!

The final day, which will feature 3 games will be featured on MTN Live!

Who is eligible for the Tournament?

We are giving priority to First Nation (Anishinaabe, status or non-status, and Dakota) 2002-2005 born hockey players with ties to Treaty 2 Territory.  This means they are from one of the nations on the map, a neighbouring nation, a Dakota nation on the map, or live in the Territory.   We are also allowing players whos ties go deeper than parents.   For example, if they are from a nation in the north, but their Koko or Papa are from a Nation in the Territory, they are eligible to try out!  GOALIES, WE ARE SHORT GOALIES!  We are willing to make exceptions for goaltenders!  Please contact! Please view map below for Territory reference;

The jerseys are made possible by the generous sponsorship from; RezGal Lashes, Lacquette Construction, Kiniw Management, and Manitoba First Nations Education Resource Centre. 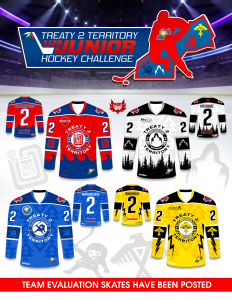 We are have evaluation skates, which are set for March 9th in Peguis, March 14th in Minegoziibe (Pine Creek), March 15th in Kakakwekejeong (Ebb and Flow), and March 16th in Brandon at Enns Brothers Arena.  Please view the poster below for more information: 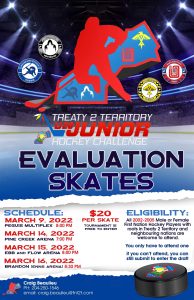 If you have anymore questions, or would like to come out to an evaluation skate, please contact