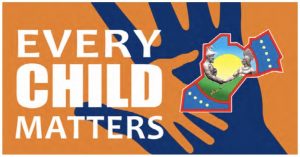 Treaty 2 Territory – It was a fast paced and highly skilled skate in Sandy Bay for our U20 evaluations on March 23.  Head Coach of the Sandy Bay Badgers Justin Richard has been developing these players for 3 years, and it showed that they have a stellar program, and are looking at options for starting a Junior B program.  It’s always a pleasure visiting my other nation, Sandy Bay is where my dad, the late Leo Beaulieu was from and I spent many summers here when I was younger.

Sandy Bay has produced some deadly hockey players, and it one of the home nations of future NHLer Conner Roulette.  They are planning an 18 and Under Tournament on April 9 and 10 in Sandy Bay, you can contact Justin Richard at 204872-2599 or Magnus Mousseau at 204-903-5991 for more information on that. 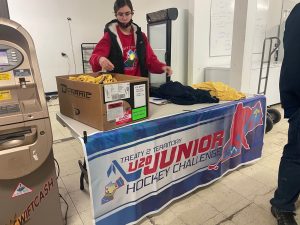 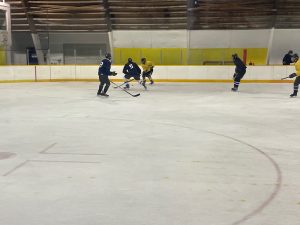 After the skate was over, I got permission to gift the official Treaty 2 Territory Every Child Matters flag by Councilor Michael Dumas.  I presented the flag to Magnus and Justin to have the flag hung up in the Howard Starr Civic Centre. 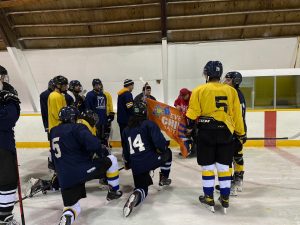 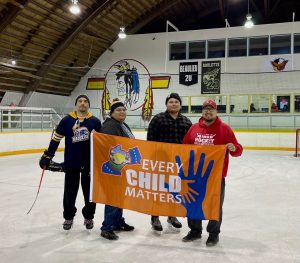 I look forward to the great relationship we are building with neigbouring nation Sandy Bay, and be on the look out for more announcements from us regarding Sandy Bay Hockey.  It was great to visit my other nation, and awesome to see such good people making sure their barn is well kept! 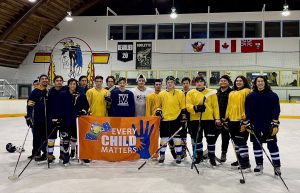 Until next time, its been a slice Sandy Bay, See you soon 🙂

Do you have something going on that you would like to be featured in our blog? Sports, Arts, Recreation, Leisure…? Contact me.