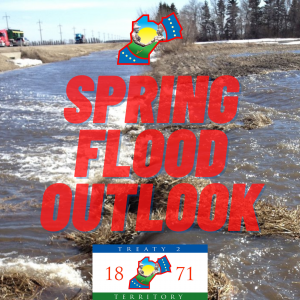 First, we want to acknowledge Joanne Robertson, Shirley Williams and Isadore Toulouse for the work they do to teach our youth about the importance of water. Please have a look at their book “Nibi is Water / Nibi aawon nbiish”.

As part of our work routine CPNWC Staff have been watching the Province of Manitoba’s flood forecast.

“The Hydrologic Forecast Center (HFC) provides flood outlooks in the latter part of February and March and in late January if the risk of flooding appears to be abnormally high. Forecasts during the flood event provide daily flows and levels forecasts as the runoff develops. The HFC also provides daily forecasts for flows and levels at key locations during the open water season as needed. Forecasts are issued as flood sheets, daily flood reports, and flood media bulletins. In addition, the HFC develops a fall conditions report, which summarizes the soil moisture and base flows and levels conditions before freeze up.”

This spring looks like Treaty 2 Territory will be fine through spring 2022 (assuming of course there are no large hydrological events).

Interested readers can view the flood forecasts for themselves at: https://www.gov.mb.ca/flooding/index.html

• Ice jams on rivers and blockages in drains are resulting in water levels affecting some highways. PR 204 near Selkirk is closed due to an ice jam on the Red River and precautionary measures have been implemented at other sites. Up-to-date information on detours and road closures can be found at www.manitoba511.ca/ or by calling 511.

• The Red River Floodway and the Portage Diversion are expected to be operated in the next few days. Ice is expected to clear out from the Floodway Inlet over the weekend and will enable the operation of the Floodway. Flows are expected to reach near 5,000 cfs in the next day or two for the Assiniboine River at Portage, which will require the operation of the diversion to prevent ice jamming on the lower Assiniboine River east of Portage la Prairie.

• PTH 75 is expected to remain open based on the current forecast.

• Current water level data and forecast information are available on the department’s website at https://gov.mb.ca/mit/floodinfo/#forecasts_reports.

• Any questions or concerns about flood mitigation should be directed first to the municipal authority. Questions about forecasts, water levels, provincial waterways, or provincial water control infrastructure can be directed to 204-945-1165 or by email to floodinfo@gov.mb.ca.
Weather
• A precipitation system has brought 5-15 mm of rain/snow mix to much of the Red River basin since yesterday.

• There is no significant precipitation in the forecast over the next three days for Manitoba.

Red River Basin
• The flood peak has passed Emerson and Letellier and is approaching St. Jean. The river levels are above channel capacity at St. Jean Baptiste, Morris, St. Adolphe, and in the vicinity of the Selkirk Generating Station. Water levels could rise above channel capacities at other locations within the Red River valley depending on the precipitation received, the rate of melting, and ice conditions.

• Peak flows within the Red River valley north of Letellier are expected to occur sometime between now and April 16. The forecast will be updated later today on the flood sheets and hydrographs.

• Peak flows are expected to arrive in Winnipeg on approximately April 10 to 16 and could result in a water level of 17.4-18.4 feet (5.29-5.60 m) at the James Ave gauging station. Flow from the Red River continues to spill into the floodway without the use of floodway gates. Operation of the Red River Floodway gates to increase the flow into the floodway channel and reduce water levels in Winnipeg is expected over the weekend depending on the ice conditions.

• PTH 75 is expected to remain open based on the current forecast.

• The department continues to monitor provincial drains, and intervene when necessary to remove obstructions and restore flow.

• Ice is beginning to break up and move on the Red River. An ice jam near Selkirk has moved downstream to the PTH 4 bridge, and the closure at PR 204 is still in place. The department is monitoring the jam as the icepack progresses.

• Some ice jams are occurring at various locations in the city causing minor impacts on water levels.

Assiniboine River Basin
• Flood sheets will be produced later today as the warm temperatures are expected to increase snow-melt and runoff within the basin.

• The department is operating the Shellmouth Dam in consultation with the Shellmouth Liaison Committee members to reduce the risk of flooding downstream on the Assiniboine River, while at the same time providing sufficient storage for water supply and recreational activities. As the reservoir has been drawn down to target level, outflows from Shellmouth Dam remain at 100 cfs. Dam operations are constantly
assessed and outflows may change as melting and runoff in the upper Assiniboine River basin resumes.

Eastern Region
• There is a risk of minor to moderate flooding in the eastern region including the Roseau and Rat rivers and the Whiteshell Lakes area.

Manitoba Lakes
• Generally, significant or full ice cover is reported on all major Manitoba lakes and there are no concerns with ice movement at this time.

• Most Manitoba Lakes are expected to remain within their desirable levels after the spring runoff.

Flood Warning: A flood warning is issued when river or lake levels are exceeding or are expected to be exceeding flood stage within the next 24 hours.

Flood Watch: A flood watch is issued when river or lake levels are approaching and likely to reach flood stage, but likely not within the next 24 hours.

High Water Advisory: A high water advisory is issued when a heavy storm or high flows are expected and may cause water levels to rise, but not necessarily reach flood stage. A high water advisory can be an early indicator for conditions that may develop into a flood watch or flood warning.