Ebb and Flow First Nation Works Together for Food Security

Treaty 2 Territory- It was a busy Tuesday in Ka Ka Kwe Ke Jeong as high-students, band and health staff, members of the Nation and Leadership came together to put together 500+ Food Hampers. Meat packages, and Cleaning Hampers.

The Nation’s Community Complex was turned into a factory warehouse after 3 semi trailers pulled up and dropped off thousands of pounds of dry goods, frozen meat, fresh bread, eggs, milk, cases of disinfectant products, potatoes and more. 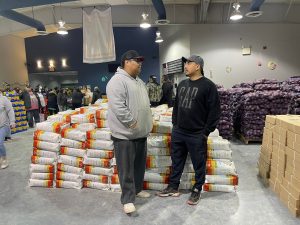 Coordinators had to quickly put a system in place so that 500 homes could receive the Hampers prior to the threat of a Spring storm which weather experts have warned could be the worst storm in decades. During previous hamper distribution events, workers had a few days to unload, organize, and deliver hampers; yesterday’s event from start to finish took approximately 12 hours.

The hampers were no ordinary size given the fact that they contained numerous items, many which were bulk items such as cases of soup, and, kraft dinner.

The system worked well as stations were set up, and assembly lines took place along with clusters of strong young men and women carrying hampers to vehicles.

Throughout the evening, hundreds of members from the Ebb & Flow First Nation shared their gratitude and appreciation on Social Media. It is estimated that each home was provided with at at least $600 in goods to fill their pantries, fridges, and freezers. 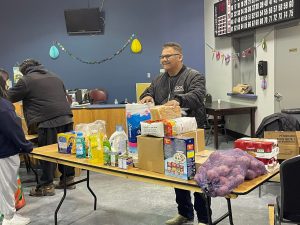 Given the the recent inflation on the cost of groceries, and the rise in the price of fuel – it’s been challenging for many families to survive on their limited incomes.

Ebb and Flow First Nation is known for coming together in times of adversity. Yesterday and for weeks to come, the Nation will be known for Food Sovereignty, Philanthropy and Reciprocity.

I am proud of our people and proud of our Leadership for standing on their feet for 12 hours to make this event successful. Seeing the smiles on our Abinoonjiiag faces when they saw the big box of cereal, peanut butter and jam going in their reusable grocery bags made it all worthwhile.

Congratulations Ebb & Flow! Nation 280 has been thought many trials and tribulations in the past while but when we come together in unity, we are unbreakable.