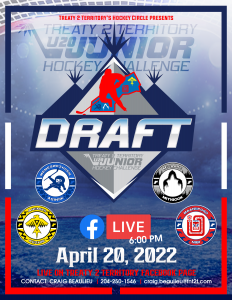 Treaty 2 Territory – We are excited to announce the draft date for the U20 Junior Hockey Challenge has been set for April 20, 2022 at 6:00 pm.  It will be LIVE on Treaty 2 Territory Facebook page and will feature the first 4 picks of the tournament accepting their jerseys and meeting their coach!

All players who have attended an evaluation skate, please contact Craig Beaulieu to confirm that you still want to be in the draft.  As previously stated, the tournament is completely FREE of cost, however players are responsible for their own travel and accommodations.  If you are playing in the T2T Minor Hockey Championship, you are still allowed to play in the U20.

The Official schedule is as follows and starts with 3 games on April 27, 2022. 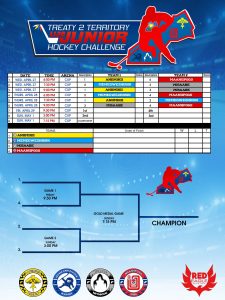 We have individual awards for Top Scorer, Best Defenseman, Top Goalie, and MVP.  We have invited all the MJHL teams to come scout the games and most of which have accepted the invite.  Official rules will be posted by April 21, 2022.

We are excited to get this tournament off the ground and look forward to April 27!