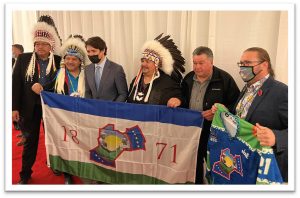 Treaty 2 Territory – Our Anishinaabek Nation views this meeting, the first of many meetings, as a meaningfully way to honour the Treaty-Crown relationship and create opportunities to proceed with interim steps to fully implement Anishinaabe Agowidiiwin and Inherent Sovereignty.

The Treaty 2 Territory Ogimaag are holding accountable not only Prime Minister Trudeau and his Cabinet, but also the representatives of the British Crown to honour their Reconciliation Plan, provide fiscal transfers based on Inherent Rights Implementation Plans, return of the Anishinaabe Akii 21.4 million acres and long-term and sustainable capital investments.

“The Treaty-Crown meeting with Prime Minister Trudeau, demonstrated the level of political relations that the Anishinaabek Nation will continue to pursue in all forms.  While this continued dialogue is appreciated, we are cognoscente of the duties and responsibilities required to realize this mutual Reconciliaction Plan with a ‘C’.  As the Ogichidaa of the Anishinaabek Nation, my role is to ensure that Treaty and Inherent Rights Entitlements become a regional, national, and international reality.” 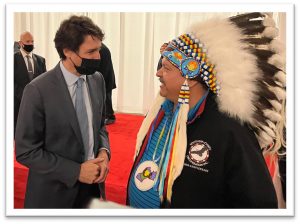