blog, Ebb and Flow, MTN News, Sports and RecreationEbb and Flow Thunderbirds 18u at Volleyball Nationals

Ebb and Flow Thunderbirds 18u at Volleyball Nationals 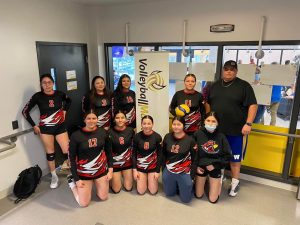 Treaty 2 Territory – The 18u Ebb and Flow Thunderbirds are at the 2022 Youth Canadian Nationals!  The tournament is being held in Edmonton, Treaty 6 Territory this weekend, with over 100 teams in the 18u division.

The Thunderbirds opened the tournament with a pair of match wins over the Newfoundland Titans and Ontario Chaos.  The fell in their 3rd match to the Alberta Phantom and are back to work tomorrow!

The Head Coach (and Treaty 2 Youth Council Co-Chair) Tyrone Desjarlais said “The girls have been working hard all season since January. We’ve been practicing two or three times per week along with exhibition games and weekend tournaments.  The beginning of the season was a bit of a learning curve for the girls, they learned a new offensive and defensive formation that took some getting used to. The more we practiced it the better we got. We were beginning to keep up with teams that beat us with ease at the start of the season. I felt good going into provincials, I seen the progress in the girls play in practice. Anything I drew up for practice drills, the girls would quickly learn it and master it in no time. We were becoming an offensive threat. Provincials weekend the girls played amazing and finished with 6 win and 1 loss to claim tier 3 champions.  Fast forward two weeks later to Nationals Championship in Edmonton Alberta. The girls carried that momentum we built in provincials right into Nationals. Winning first match vs Newfoundland Titans 25-16, 25-22. Third match vs Ontario Chaos 25-21, 25-18. We lost our third match to one of the top teams in the division Alberta Phantoms 23-25, 22-25. No matter what happens in the playoffs, the girls are already champions and make me very proud. I see the girls as role models in our community and other youth in the area that are in the volleyball circuit.

Good Luck girls, we are all cheering hard for you back in Treaty 2 Territory!  GO THUNDERBIRDS GO!