The Inspiring and Steadfast Journey of Ikwe Jaime Paterson-Brading

Treaty 2 Territory – Working as a helper in our Treaty 2 Territory Anishinabek Government has granted me with an opportunity to meet countless supporters, and those from the general public who attend our events.

One afternoon last summer, while working at a fastball tournament, we had this young boy come up to our booth to ask if there was anything he could do to help. He was kind, and smiley; more than anything though, he wanted to somehow volunteer his time. I came to learn that he was 9 year old Jace Paterson. I didn’t know much about him but I knew that he was raised well; Please and Thank you, and only kind words came from him as he hung around our booth chasing foul balls. I was eager to meet the parents of this young man.

Fast forward 10 months, and I bumped into Jace again at hockey tournament, where he introduced me to his mom.

A proud Indigenous Ikwe; a member of Wuskwi Sipihk First Nation, Jaime is a resident of Dauphin, Manitoba.

Born in The Pas, Manitoba, Jaime later lived in Thompson, Manitoba until the age of 11. It was around that time that Jaime and her family came home to the Parkland to be closer to her Grandparents in the Valley.

Jaime is proud to be the daughter of Bernice & James Paterson. Her mother is from Duck Bay; her father from Lenswood, Manitoba and a member of Sapotaweyak First Nation. 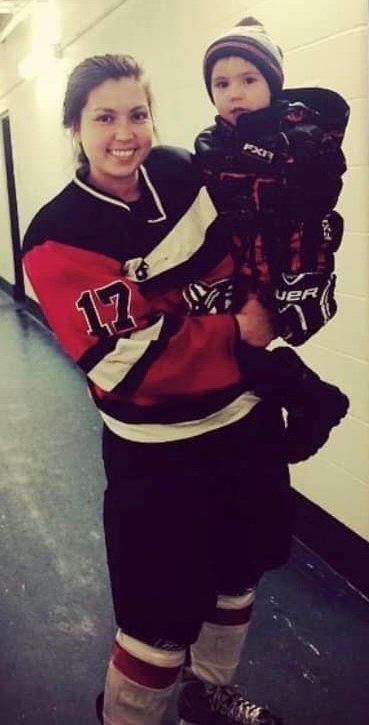 Jaime’s story is familiar to many, but unique in so many ways. Growing up Jaime began skating at the age of 4, and has never stopped. She played Thompson and Dauphin Minor Hockey, as well as multiple provincial championships throughout the years; she ended her minor hockey with Parkland Panthers. Jaime played at 3 National Aboriginal Hockey Championships with Team Manitoba throughout the years and went on to play with Manitoba Women’s Junior Hockey League.

Since those tender years, a lot has changed for Jaime and her life has only become more busy and more blessed.

I genuinely believe that all mommies are super moms. Jaime, you see, she is super mom and then some. Jaime and her husband Wade have 3 biological children at home in addition to raising another child who has grown up, moved out and doing very well independently.

Being a mom of 4 involves commitment, sacrifice and the ability to juggle; something Jaime balances every single day. 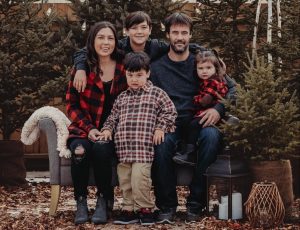 Jaime attended the University of Manitoba and graduated with Bachelor of Social Work Degree in 2017, while Jace was just 5 years old. She is now employed with West Region 2 & 4 Health Services working with Jordan’s Principle.

As if working full-time, and parenting 3 children (10 & under) wasn’t enough, Jaime and Wade put skates on their oldest son as a toddler, and enrolled him in hockey. Jace plays Minor Hockey in Dauphin, and also tried out for and made the Western Canada Hockey Academy Stealth Wolves 2022 Spring Program. Jaime and Wade travel to Brandon for Jace’s practices, games, and tournaments.

“I enjoy being part of my children’s journey – Hockey has been on our path so far and I am grateful to have the opportunity to watch my son navigate his way through sports and athletics. Hockey is so much more than a game, he has created relationships that can last a lifetime; it teaches adversity and teamwork and so much more” shared Jaime.

Listening to Jaime talk about the travel involved with upcoming tournaments, exhausted me. And, just when I thought this super hockey mom couldn’t handle anymore, she shared that she has added to her schedule.

Just last week, Jaime put her name fourth to become a Board Member with Dauphin Minor Hockey. Jaime has been granted the volunteer title of “Cultural Director” to advocate and promote cultural diversity and inclusion within DMH. “I want to be instrumental in supporting the Dauphin Minor Hockey Board to be on the path to truth and reconciliation” shared Jaime.

We know that given Jaime/s unwavering love for children, and her tenacity and passion for the sport of hockey, Jaime will do all that she sets her mind to. 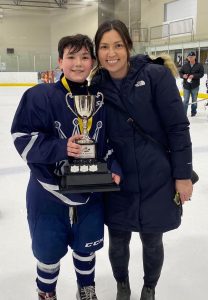 We don’t know how she does it, and how she remains such a happy, positive smiling ray of sunshine, but she does. Her determination and dedication have not been lost as we witnessed that same tenacity and desirable work ethic in Jace when we met him last summer. The apple doesn’t fall far from the tree.

Congratulations Jaime on your incredible achievements to date. We are incredibly proud of you for always going that extra mile. The Community of Dauphin, and the Treaty 2 Territory are so fortunate to have you!

Miigwech Jaime for taking time out of your busy schedule to sit and share your inspiring journey with me.

……And off she goes with her love Wade, and Brinley and Bryce to take Jace to baseball practice, and later football.