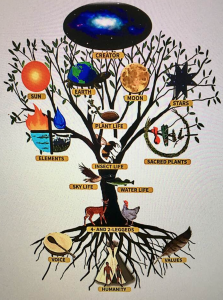 Treat 2 Territory- A worldview can pertain to an individual, group, or society. Overall, a worldview is a set of beliefs and values that are honoured and withheld by a number of people. A worldview includes how the person or group interacts with the world around them, including land, animals, and people. Every person and every society has a worldview. Many societies pass on their worldview to their children to ensure worldview continuity. As people interact and learn from one another, it is not uncommon for them to acquire the beliefs of other worldviews. Worldviews evolve as people and societies evolve.

“Earth is the foundation of Indigenous peoples. It is the root of their spirituality, knowledge, languages and cultures. It is not a commodity to be bartered to maximize profit; nor should it be damaged by scientific experimentation. The Earth is their historian, the cradle of their ancestors’ bones. It provides them with nourishment, medicine and comfort. It is the source of their independence; it is their Mother. They do not dominate Her, but harmonize with Her.” (Barnhardt, 1991)

The root of the difference between the two worldviews is that they generally look at opposite approaches to knowledge, connectedness, and science. Indigenous cultures focus on a holistic understanding of the whole that emerged from the millennium of their existence and experiences. Traditional Western worldviews tend to be more concerned with science and concentrate on compartmentalized knowledge and then focus on understanding the bigger, related picture.

2. (FN) There can be many truths; truths are dependent upon individual experiences.
(W) There is only one truth, based on science or Western style law.

3. (FN) Society operates in a state of relatedness. Everything and everyone are related. There is real belief that people, objects and the environment are all connected. Law, kinship and spirituality reinforce this connectedness. Identity comes from connections.
(W) Compartmentalized society, becoming more so.

4. (FN) The land is sacred and usually given by a creator or supreme being.
(W) The land and its resources should be available for development and extraction for the benefit of humans.

5. (FN) Time is non-linear, cyclical in nature. Time is measured in cyclical events. The seasons are central to this cyclical concept.
(W) Time is usually linearly structured and future orientated. The framework of months, years, days etc. reinforces the linear structure.