The Process of Law Building

The Process of Law Building

The colonialization process was intended to destroy the indigenous cultures. 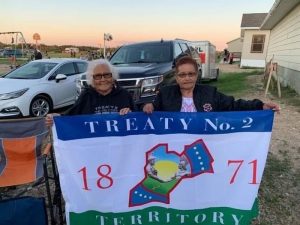 To wipe them out. To destroy the languages, the governing systems. To assimilate the people.

The time has come for our FNT2T Nations to rebuild, renew, start over, to move out from under the colonial system and to replace it with the system that each community and each collective wishes to use for a long, long time into the future. Constitutions are built to last.

The process of a community or collective deciding how it is going to govern itself is for the people of each local Nation and each collective such as FNT2T to decide. Today FNT2T Nations have decided to build on the Inherent and Treaty right protection. To adopt the “Two Row Wampum” relationship.

We set out certain positions simply as starting points. The people will decide to move with each position, to build on it, to adopt it and move forward. The stated position is simply to get the discussion started.

We reject the concept that we are a part of the State of Canada. Rather we are related to Canada through a Treaty intended to endure and function “as long as the sun shines and the wind blows and the grass is green.”

As a free, self-determining people, we are related to the people of Canada through their highest political power, “the Crown”, with whom our relationship is our mutual Treaty.

We reject the notion that over time and through methods to which we did not consent that we became a part of Canada, a part of its federation, a part of its “common law”. We reject any unilateral restrictions imposed upon us.

Over the years we were subjected to strong coercion, misrepresentation, outright fraud, broken promises, widespread acts of dispossession, a blatant disregard for our human rights. Shortly after Confederation, Canada passed laws reducing us to being their wards, giving them authority to dominate us with our consent. These laws are still the law of Canada today and not ours. We are still resisting these attempts to dominate us.

Canada has acknowledged these historical facts. It has apologized for them. It has, through its own constitution, agreed not to pass laws contrary to our historic and inherent rights. We reject, however, any thought that Canada’s actions make us subject to any kind of “treaty federalism” or a “confederated relationship”.

We continue to rely upon the Crown of the People of Canada’s promises to us to leave us undisturbed in our Possession of our Dominions and Territories being those lands we have reserved for ourselves and the use of our future generations.

We renew our offer to Canada to live perpetually in peace and friendship with them.

Our right to govern ourselves includes all matters that are of vital concern to the life and future of our People, our culture, our identity.

Our culture requires us to respect a similar right of those who by our Treaty have received our consent to immigrate and settle on certain lands providing that certain conditions are met. Any laws we might make, therefore, which have a major impact on other jurisdictions will be negotiated with them, and we expect that the reverse will also be true.