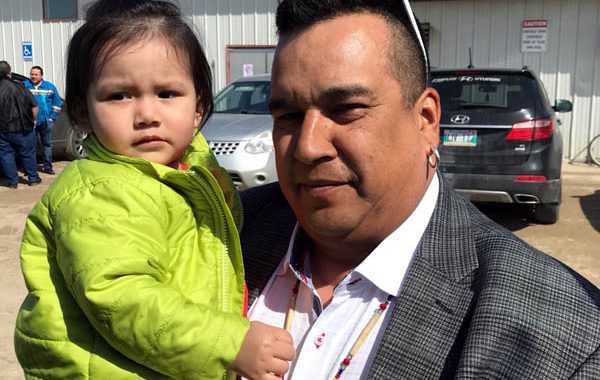 His Granddaughter came to see him at work.

To us this is a reminder that what we do today is for the people who come behind us.

The Government of First Nations in Treaty 2 Territory’s work on governance and protection of our territory is about our grandchildren and the generations to come.

FNiT2T’s work with the seven councils within the governance model continues as we move toward a Community-Based Treaty-Based Government.

Exactly how is this happening?

Community members are involved with local councils such as the Anishinaabek Council, Elders Council, Ikwewak Council, Lands, Water and Resource Council and Youth Council that they are creating to look after the issues and solutions of their First Nation.

This is done through the constitutional development right now happening in each community.

Letters have gone out to the Political Territorial Organizations created by the Indian Act to serve notice that FNIT2T is moving forward as a Community-Based Treaty-Based Government. This means Nothing About Us Without Us

“The business that takes place in our territory must come through our legislative body, our Governing Council is structured to advance our membership and territory, after 148 years this is real”, Grand Chief Eastman.

Eastman, who spends majority of his time leading his community of Ochichakkosipi First Nation as Chief says reliance upon each other’s role within the Government allows it to function.

“Our people are getting involved and being proactive to be a community based driven government that will defend our territory and protect our Mother Earth,” he said.